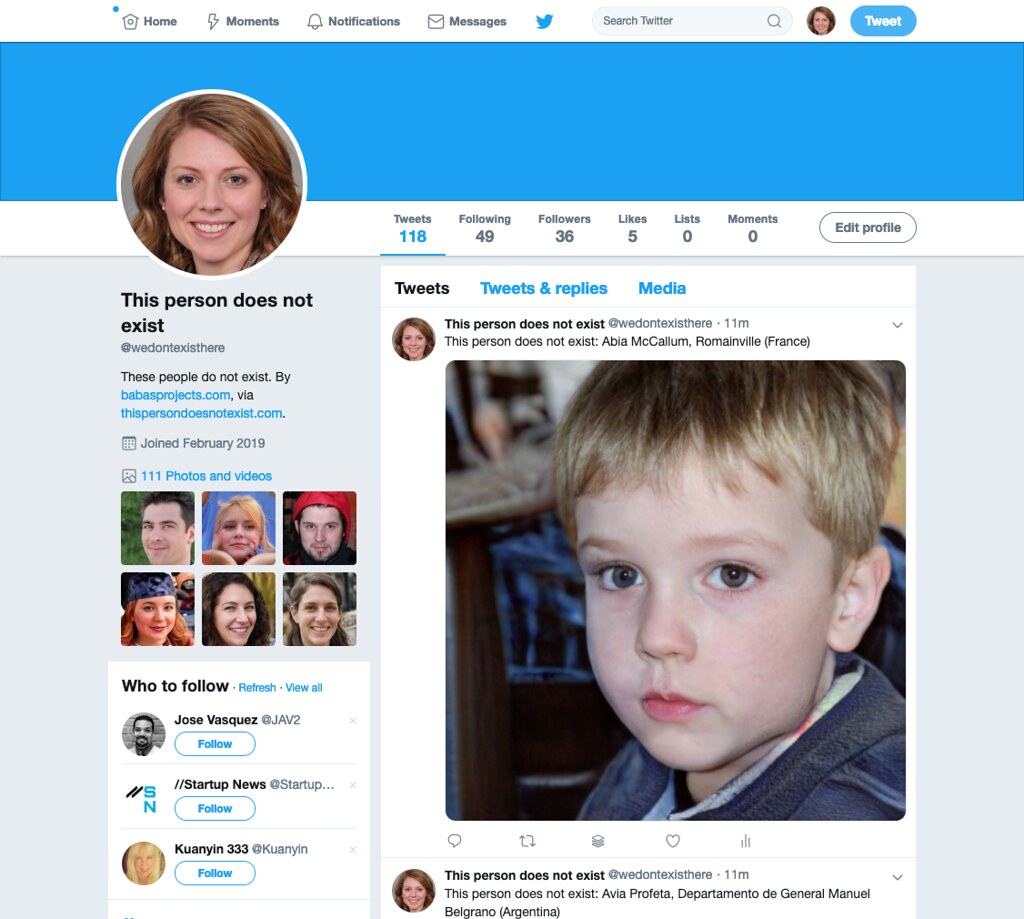 A few months ago, graphics card maker NVIDIA published a paper in which they explained how they extended an algorithm from 2014 to create photo-realistic portraits that are, when observed casually, indistinguishable from the real thing. When thoroughly investigated, many of the resulting images still appear flawless.

A few days ago, (Former?) Uber engineer Phillip Wang (probably this is his LinkedIn account) implemented a version of the NVIDIA algorithm that publishes a new face at the click of a mouse at thispersondoesnotexist.com.

Once an hour, an image is picked up from Wang’s website. The image is pushed through a facial recognition system to identify whether it’s a man or a woman. Then, via behindthename.com, a random name that matches the gender is attached to the image, which is followed by also connecting the person to a location pulled from Wikipedia. I played around with attaching the non-existent locations created by @unchartedatlas, but it turns out that Twitter has recently made it increasingly difficult to obtain content from their platform. (In short, they rejected my request for accessing Twitter programmatically.)

As an aside, I threw together the same implementation for @ceci_chat, which tweets cats that do not exist.

In June 2021, the Brazilian tech website Canaltech wrote a nice piece on the bot. In the same month, Prof. Dr. phil. Theresa Heyd at the University of Greifswald, in Germany gave a talk on the cultural context of the bot.

In September 2019, the face recognition API I was using, FaceX, ended its free tier. I moved to Microsoft Azure, which gives the bonus of also estimating the age of the person in a photo.

What if this is a pipe?

The names have been changed…

In October 2021, I moved for name generation to the randomuser API. This has the advantage that, for some countries, it’s able to generate more typical names, which should create people that don’t exist that are just slightly more credible.

The death of the API

In February 2022, Twitter announced that using their API would no longer be free, even for small accounts. To safeguard continuation, I also began a @wedontexisthere account on Mastodon.