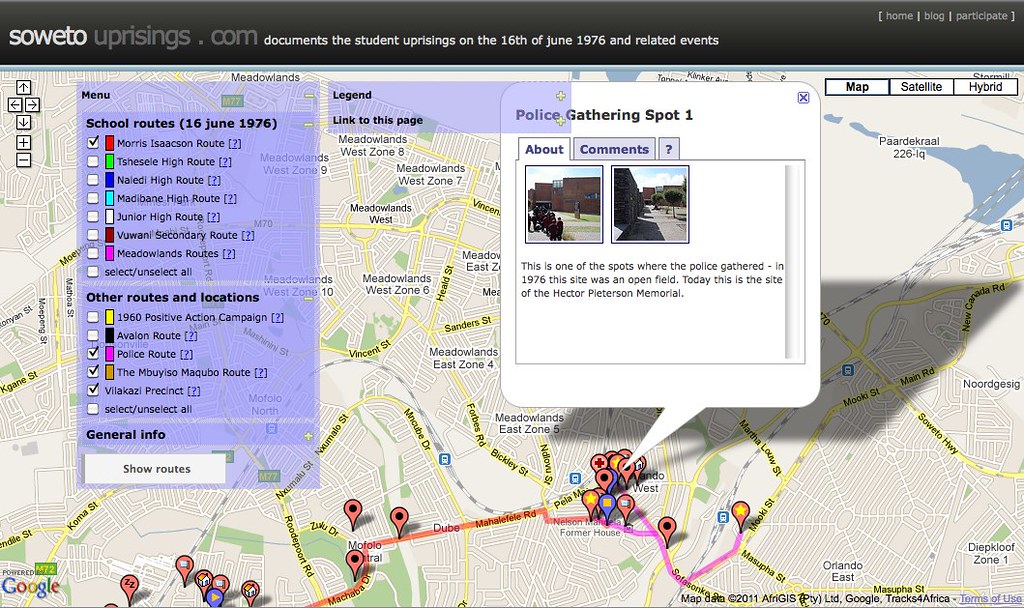 June 16th 1976 was one of the most important days in recent South African history and is by many considered the event which signaled the beginning of the end for the South African apartheid regime. Thousands of school going children went to the streets and protested against the introduction of Afrikaans as the main language for instruction in South Africa’s schools.

Although the protests were planned to be peaceful, it got quite out of hand with and at the end of the day, some 60 kids had been killed, including the most well known, but not the first, Hector Pieterson.

At Soweto uprisings . com you can find information on the routes taken by the protesters and a lot more information besides.
The website is a mash-up of Google Maps, Flickr, Google Blogsearch, Wikipedia, GeoURL and then some.

Soweto uprisings . com is a collaboration between myself and Ismail Farouk, who has collected all related information over a three month period.

The end… of the line

In 2016, Ismail and I were interviewed for an extensive piece in The Guardian, on the occasion of the 40th anniversary of the Soweto uprisings.

In mid 2018, after Google end-of-lifed the Google Maps v2 API and the site was bricked, Soweto uprisings . com was taken offline. This, after a commendable 12 year run.

Little remains of the platform. Though an ancient presentation persists.

Related:  The year that was . net