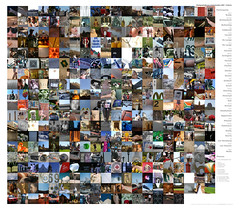 The submissions to the 2007 Pretoria photomarathon will be exhibited quite differently as compared to February’s show after the Johannesburg photomarathon.

Because the exhibition space where the works will be on show now, the Outlet gallery in Pretoria (from September 28, if you’re interested), is so small, there simply wouldn’t be enough room to exhibit even a quarter of all the photographs if I’d use the same method.
Also, it was a bloody pain to string them all up.

The works will be exhibited in two ways: As a video slide show and as one poster with all the submissions as thumbnails. The poster is released under a creative commons license. In this case, that means you can copy it, but not make money with it. You have to specify who the original authors are and you can’t make any derivative works.
All that said, what you can do is download it and print it.

The work which is hosted at Flickr prints to a nice 41cm by 36cm at 300dpi or 82cm by 72cm at 150dpi file. However, as there’s an upload limit of 10MB for images uploaded to Flickr, the original, which is not on Flickr, prints sweetly to 82cm by 72cm at 300dpi or double those numbers at 150dpi.
If you’re interested in obtaining a large hi-def print (82x72cm at 300dpi), you can order one with me for 350 Rand. That is at cost (remember, creative commons). However, this also means you will have to pick up your print at the opening of the exhibition of the Pretoria photomarathon, on September 28. You will also have to pick it up before 7pm.

There’s also another print going to be available with the winning photographs and photographers highlighted in the matrix of images.

I had quite a struggle getting the above image together. You’d think it’s fairly straightforward, but it wasn’t. Here’s how I ended up constructing the work.