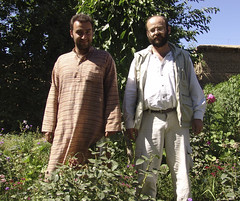 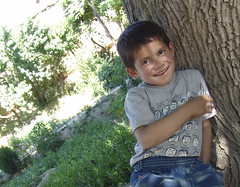 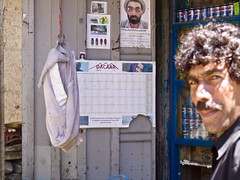 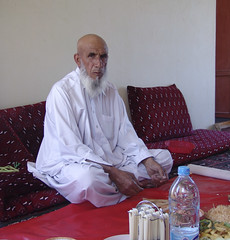 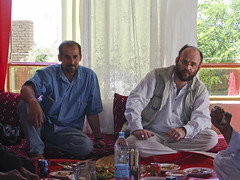 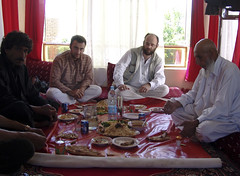 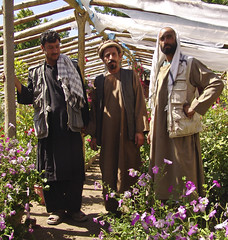 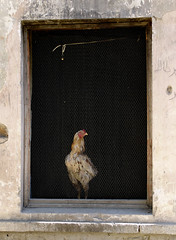 How much is that chicken in the window?
World » Afghanistan » Istalif » Overlooking the Shomali plain

Asif was the DACAAR driver who got us to Mazar-e-Sharif in March. Shortly after my return, he asked Lev, Lyn and myself to join him on a trip to his family's house, close to Baghram, some 60 kilometers out of Kabul.
Of course Lev and I unconditionally surrendered but Lyn, unfortunately, was needed elsewhere on the same day, meaning it was just 'us boys' again.

Starting of with a side trip to Istalif, known for its mostly green-blue glazed pottery in all shapes and sizes, Asif treated us to yet another beautiful trip into 'the real Afghanistan'. And, of course, not changing his routine from our previous trip, he appeared to be bumping into family and friends on almost every street corner.

In between Parvan and Baghram, we braved a dirt track besides a fast flowing but small river, aiming for Asif's family house. His father and three brothers live there and all are married. Naturally, we didn't see any of the women, although I do suspect that it was them who made us lunch. Grilled chicken, salads, eggplant, chips, rice, steamed lamb and more. Truly great.
Afterwards, we lounged in one of the many gardens they were running, this one being the flower garden, were we had tea and sweets and were we had no choice but to leave with sackloads of berries.

Also having brought a bottle of sweet vodka, only 4.5 dollars at Supreme, Asif drove us to a cousin of his, where we could nip at the sweet liquid without Asif encountering the wrath of his father. The cousin, a buzkashi player, in the true spirit of Afghanistan, was married to four women and had no less then 18 children. A busy man indeed. I forgot to ask Asif how old the man was. Keeping in mind the many stories that foreigners over-estimate Afghan age with an average of 20 years, yes twenty, the man was probably around 20 years himself. An impressive feat indeed.

It was a very good day, not in the least helped by the truly fantastic weather, clear skies and the beautiful backdrop of the snow-capped Hindu Killers, the Hindu Kush, in the background.
Hindu Killers? Yeah, look it up.
Then, I also was given no choice but to extensively put my limited knowledge of Farsi into use once more. Asif is a great helper, in that he simplifies Dari sentences so that I can understand the essence of what he's trying to say or so that he can make clear that he understands what I'm trying to say, occasionally throwing in new words which I am then also forced to learn.

But probably what made the day was our tea in the garden of Asif's family, sitting on Persian carpets in the first floor of the house, or taking in the view of the Shomali plains from the plateau on which Istalif is located, or talking to Asif's cousin with the 18 children, just trying to understand how he can and even want to manage, or the mast and bolani at a roadside stall (I'll find out to what extent my internal combustion system appreciated today) run by yet other friends of Asif.

There's another dimension to this, even though I haven't figured it out completely. I'm of course closer to the Afghan people then most expats due to my background. if, some how some different paths would have been chosen at some early stage of my life, it could very well have been me, living in rather similar circumstances albeit in a different country.
The good news of course being that it could have been me, newly landing his fourth and 22 year old wife. Indeed, every downside has its upside.
But seriously, I'm not yet clear on how to exactly take this whole aspect in.

Our trip, but also the slightly worried atmosphere at yesterday's hash, after which I was totally knackered, apparently not being quite fit enough to run up and down hills in 40 degrees centigrade, and the contrast with reality as I experience it, highlight the strange duality the country has to suffer from.
On the one hand, security is tight, many NGOs not allowing their people out after dark, the restaurants being empty, expats moving in Land Cruiser convoys, the foreign supermarkets having 24 hours of police protection per day. On the other hand, on a day like today, you encounter only, and I mean only friendly people.
Which of the two appearances is fake? Will the real country please rise?

Oh, and my external card reader died. So articles with pictures might be few and far between from now on.