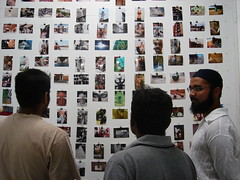 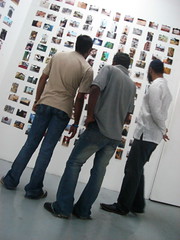 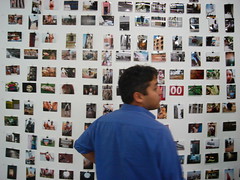 Daniel looking at some results 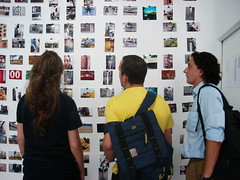 Looking at the results 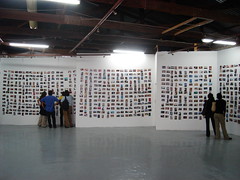 Tonight saw the opening of the exhibition of the first African photomarathon, at The Bag Factory. As we had quite a struggle to get the winning images enlarged, forexed (mounted) and framed, the last few days ended up being extremely hectic. But with a bit of help today, not in the least from lovely Betsy, we managed to get everything up and running at just after 5.30 in the afternoon. And considering we were opening the show at 5:30, it really wasn’t a minute too soon.

Last Saturday, Betsy and I set the Pretoria hash near our home, in Jo’burg. In the afternoon, in the bleeding sun, I got to set the run while Betsy was creating a Surinamese/Dutch dish for the after party. Then, a few hours later, I got to run the route again, while Betsy was driving around, making sure everyone would get a decent and fresh drink at the halfway beer stop.

The day before the hash, I had a talk with Ismail Farouk at Wits university about Soweto uprisings . com. Invited by Christo Doherty, the 90 minute presentation was actually a double bill, the other half being a talk by Daniel Hirschmann, a South African artist who talked about some musical steps he created at the centre Pompidou in Paris.

Related:  Esfahan: half the world
This text is available under a cc-nc-a license.