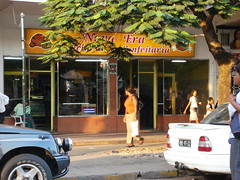 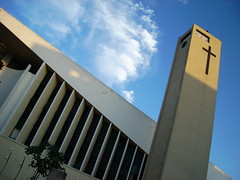 On a weekend break to Maputo. My South African visa expires this weekend and although it’s possible to extend your visa through the ministry of home affairs, I -really- don’t want to dive in to the bureaucratic hell which that -must- be. Going on a trip to Maputo is much more enjoyable. And this weekend, Maputo is home to the 2007 Africa interhash (the event was better organized than the website).

I planned on shooting loads of pictures in Maputo as it is a very picturesque city. On the South African/Mozambican border, I whipped out my camera to shoot a nice panorama picture. But my camera had decided to no longer recognize the memory card. Internal memory? Worth ten images.
The camera, a simple Sony has slowly functioned less and less over the last few months and although I’ve shot nearly 7500 pictures in the six months I own the thing, that really isn’t an excuse to stop working. A bummer: when leaving the country last time, I got sales tax back at the cost of handing over the invoice, so now, I no longer have proof of purchase.
So maybe I should join my poor black brethren at some Jo’burg intersection, carrying a sign “Will code for hardware”.

I had forgotten how humid weather can be. At the border, 35 degrees centigrade, the bus had to wait for a while with the door open and the aircon off. Within minutes, it was like swimming on dry land. And Maputo isn’t much better. In fact, when there, running around, at some point it felt like drowning on dry land.
In Jo’burg, even after a major rainstorm, streets dry up within minutes.

It’s funny to see how long distance travel has changed in the last few decades. Of course, air travel will never be the same due to the many low cost air carriers operating in roughly half the countries in the world (even though Africa is extremely under represented on that list), but long distance bus and train travel also will never be the same again.
In the past, getting on a long distance bus would always be a bit of a leap of faith: Do I have to switch busses? What time will I arrive? Will I arrive? Where will I exactly arrive? Particularly long distance travel between different countries was even more of a challenge due to the language barriers you’d have to work through to get from A to B.

Now, with the advent of ever present mobile communication, you can expect to have access to some mobile network in even the most remote replaces on earth. You can now always let friends, family or your next hotel know when and where you’ll be arriving. Or, more importantly, perhaps, let them know you’ve been apprehended by corrupt border officials.