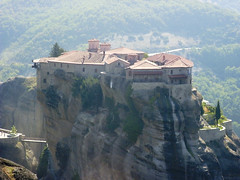 Up on a hill
World » Greece » Kalambaka » Psaropetra viewpoint

Meteora is well known for several monasteries that are perched on top of rocks in the eroded landscape around the town of Kalambaka. Busloads of tourists are driven to the area every single day of the year, resulting in some 1.5 million visitors, annually.

Waiting for our train, Joost and I drank so much retsina and metaxa, we were quite drunk when sharing a compartment with two Marias, one older and one good looking younger, who just had broken up with her boyfriend and was now heading back to her hometown Thessaloniki, after having lived with her boyfriend in Athens for a couple of years. I think we cheered her up, mostly because she didn’t understand the abuse we threw at her in English.

Related:  Relaxing in front of the Acropolis
This text is available under a cc-nc-a license.