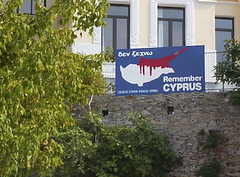 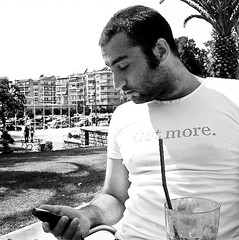 Kavala is a lovely and quite little town. Most visitors to Kavala end up going to Thassos, the very touristy island just off the coast.

We staid in a small house, right below the fortress in the old town of Kavala. A good choice. Most of the visitors to the wedding were staying at a beach resort some 15 minutes out of town by car. Although the wedding party was going to be held there, there's also nothing at all to do. There wasn't even a restaurant.

When I signed in at our hotel, the older man at the reception made it clear we would only be able to stay one night. Staying longer was a big problem since, as he said, the next night 'Babak' would come and stay for four nights.

The bachelors was reasonable. We had way to few people of which many didn't even know each other. Easily the best part was the Greek inexperience with bachelors parties. A guy dressed up like a Tirolean Heidi was therefore a rather remarkable sight and Pens didn't have a hard time entertaining the girls.
However, he was unable to get together an all-female soccer team to play against the boys.

The pre-marriage party in a pub/club in the docks of Kavala, later in the evening, was good. Luckily enough, for the first couple of hours, the drinks were catered for, since we later found out that a regular Amstel set us back no less than 4 euros. A glass of house wine no less than five. In a country were a half liter of retsina, in a pub, only costs about 2 euros, that's a lot of money.

Related:  Cyprus: where turkey and greece meet… with guns
This text is available under a cc-nc-a license.