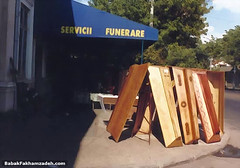 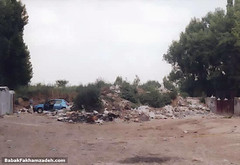 Close to a graveyard... 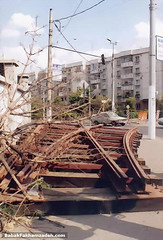 Just some train tracks lying on the street somewhere 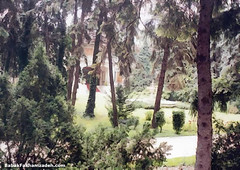 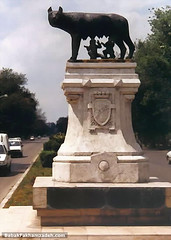 The link with Rome is obvious here 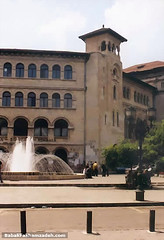 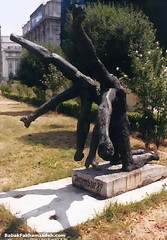 Six arms stretching out, in remembrance of the 1989 uprising 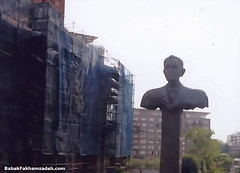 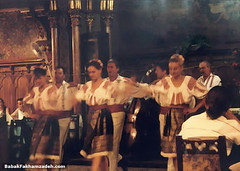 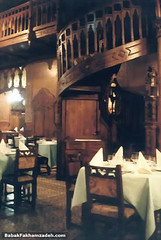 A church, oh no, wait, its a restaurant 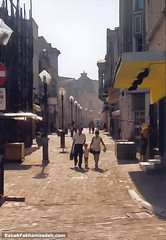 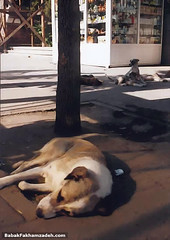 Surprisingly, there weren't as many stray dogs in Bucharest as what is normally assumed 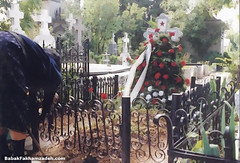 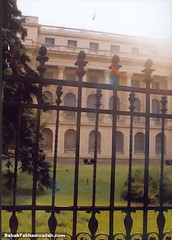 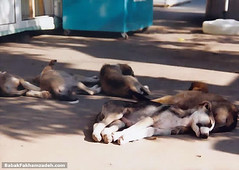 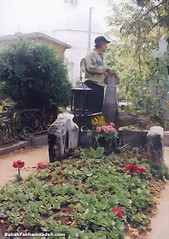 It wasn't very surprising that the next day most men had a very hard time getting out of bed, most not getting out before 12 in the afternoon, just in time to get their plane. Two of the guys, Jacobs and Slump were able to get out of bed a bit earlier and we had brunch at a small cafe next to the hotel. Very cheap and surprisingly good. What was even more surprising was the ban on smoking in the restaurant. In Romania, that's nearly a contradiction in terms.

Some time later, I bumped into two other Veti and had a coffee in the same cafe again. This time, some old guy in the same cafe noticed some of our T-shirts, advertising Habitat for Humanity. He had to come over, continuously explaining that 'this' would become big business and that we just had to go in business together. He gave me his e-mail address and I even emailed him, after I got back. Haven't heard from him since.

Bouk was the only one leaving Bucharest late in the day, on another plane. We had planned to do some more site seeing in the city but had missed each other in the morning. However, he didn't expect me still being close to the hotel and when he gave me a call to find out where I was, it turned out that he was in a cab, driving northwards. Why north? I had mentioned the previous day that I was going to visit Ceaucescu's former residence and that's in the north of town.

We met up some time later, visited Ceaucescu's residence, were kicked out by police and went to his grave instead. A treat, since you also get the graves of his wife and their son in one go. What else could you want?

After putting Slockers on the bus to the airport, I wondered if, now that I was alone again, I would interact more with locals. I did. Not only did I talk with a Pakistani at my hotel, when I picked up my luggage, a very nice girl also started talking with me about the (beautiful, at least according to her) Black Sea, when she saw my backpack when I was on my way to the train station.

That evening, I had a very nice dinner in a very nice restaurant. With granite columns and very nicely decorated wooden sculptures, it resembled a church. The folk dancing and music made it even better. I expected high prices but it was dirt cheap.

I started talking to a German girl, working for Hotel Palace Berlin, who had also fallen in love with Eastern Europe. Sadly, I had to leave too early to catch my train to Sofia, leaving the same evening.

I had gotten my ticket earlier in the day, but only now, after close inspection of the ticket, did I notice I hadn't any reservations for a sleeper. It seemed I was traveling to Sofia on a regular passenger train. Not only that, shortly after arriving in my cabin, two youngsters joined me. Hendrik and Stella turned out to be two Interrailers from Holland, studying at Utrecht university, on their first major trip abroad. The worst wasn't them being Dutch, it was only there being two couches for three people in our compartment.

Thief in the night

Clearly, Hendrik and Stella were a bit young, their 'first time abroad' easily showing. As specially Hendrik, with an air of "I've seen it all, I know what it's about" wasn't particularly open to the different cultures they had come across.

Nevertheless, both Hendrik and Stella were very friendly and, together with Wayne, who we met in the hotel we stayed in, in Sofia, we 'did' Sofia and visited the Rila monastery in the south of Bulgaria.

During the night, traveling by train from Bucharest to Sofia, I nearly got pickpocketed. Since Hendrik, Stella and myself were sharing a compartment, there was room for no-one to actually lay down and get some sleep. Instead, I offered to find an empty compartment, found one and went to sleep.

I awoke to someone banging loudly on the compartment door with a heavy club. Apparently it was difficult to wake me up, judging from the stance this custom control officer was taking. Five minutes later, it was border patrol and I was allowed to go back to sleep again.

Then, I was already sleeping again, I somehow felt a small hand reaching for my pocket, the one were I was keeping my wallet. I opened my eyes and quickly sat up. Still groggy from sleep, I was looking, wide eyed, in the scared-to-death eyes of a 10 year old. Both frozen in action, the boy audibly swallowing. He gained his composure sooner than I did, opened the compartment door and quickly ran off. I went back to sleep.