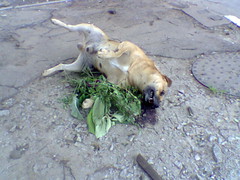 Got sunburn quite a lot today, walking around town for hours, trying to find other places to stay beside the Small World Backpackers Lodge. Nathalie, the German dirty backpacker who’s also staying at the lodge joined me today. Partially because she also wanted to see a bit of the town, partially because she needed eye drops to counter an allergy she was developing. She’s waiting for Boyd, her loverboy she met at Vic Falls to show up and wants to look her best. Walking around town, she did find her eye drops, but she got much more sunburn than I did.

The slump in the tourism industry has taken its toll. There are practically no more tourist lodges left in Harare. There are still some that cater to a local crowd, mostly because these men can’t take the girls they bring with them to their wives, but I wasn’t really interested in these kinds of lodges. There are still some hotels left, but they’re very expensive, starting at 70$ per night. So it seems I’ll reside at the Backpackers lodge for now.

The previous night, I was being kept awake by a low-flying mosquito and just before I fell asleep, I heard people talking outside. Just before dozing off, I realized that what I thought was a heated discussion actually could very well be something of a fight.
Today, I heard from Rachel that Peter had been taken to the police station in the middle of the night. An older Zambian white man and a black young woman had checked in during the day. In the middle of the night, the girl had shown up at the gates, totally drunk, however, without the white man. Verbally abusing Rachel and Peter, she called the cops and told them Peter had called her a kaffir, resulting in Peter taken in by the police. In his sleeping gown, he was barely allowed to put on some shoes before they walked to the station. Peter in front, one of the policemen was constantly cocking his machine gun behind Peter’s back. After calling around for a babysitter, Rachel raced to the police station and paid a 25000 dollar fine to get Peter released.

Related:  A taste of Xinjiang

In the evening, I had dinner with Tawanda and Dean, at Tawanda’s place in Kuwadzana. His wife and daughter had prepared the sadza, butternut, rice and chicken and they sat in the kitchen while we were eating at the dinner table, which made me feel a little bit uneasy although everyone seemed to think it normal.
When we sat around the table and the food had just been served, Tawanda’s daughter kneeled next to the table, saying “you can eat now”.
It was my second sadza of the day since earlier, exploring Harare with Nathalie, we had gone for Sadza ne huku at a small shop downtown.