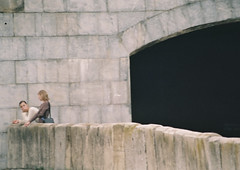 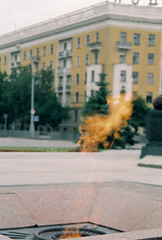 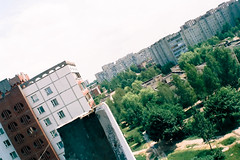 When Eastern Europeans (including Russians) say Minsk they put a lot of stress on the 'i'. As a result, apparently, you have to say Miiiinsk, when referring to Minsk. So, I arrived in Miiiinsk at 7:00am. Seconds after leaving the train, a 'friendly' Belorussian already wanted to take care of me. Showed me where I could get an onwards ticket to Moscow and hoped I was going to use his taxi to get to a hotel. Wrong. I friendly declined and walked to Hotel Minsk. Meanwhile, my mobile phone didn't work, again.

It was mighty early and the hotel seemed to be closed. As a matter of fact, what I found out later was, that I was waiting in front of the doors of an office building and that the hotel was around the corner. How could I have known? A very large sign on top of the building said 'Hotel Minsk'. The doors I was waiting in front of, where directly under the large sign. If it was not the Hotel Minsk, why put up the sign? After going in and asking reception, the two guys there both pointed me in opposite directions. I decided to try my luck and just walk around the block, with luck!

I knew the hotel was reasonably expensive. I also knew there was something of a tourist office (actually just two friendly ladies) inside of the hotel, who most probably would be able to direct me to a cheaper place to stay.
Lucky for me, they did. When their first choice turned out to be fully booked, they sent me to a second hotel. When that turned out to be fully booked too, I convinced them into actually calling the next hotel before sending me of, to see whether it was full before I went there. Eventually, after calling three other (fully booked) hotels, they found me a hotel very much in the south of Minsk. Just 45 minutes by bus. Still, not really a bargain at 9000,000 a night.

The hotel was on several floors of a typical communist apartment block. One of many 24 story buildings thrown together on a large plot of land somewhere really in the middle of nowhere, it had no hot or even lukewarm water to ease the traveler in me. Still, I did have a bed for two, to ease my sleep.

Prices and money in general here in Belarus totally warps your sense of cost. For starters, everything is charged in millions. Yes, millions of Belorussian Rubles.

Related:  We Will Rock You

Here, a Big Mac might be about 350,000 Rubles, when a bus ticket is no more than 6000 Rubles. To compare that to western prices, that would be like getting a bus ticket for $0.02 or a Big Mac for $100! Then, of course, Eastern Europe in general, and Belarus specifically is smoker's paradise. Cheap packets of cigarettes, for example Sputniks, at 60,000 a piece would make everyone a nicotine addict. Is that confusing or what?!

When I was taking a break in front of the Sputnik hotel (one of the booked ones I was directed too, by the lovely ladies at hotel Minsk), I had unpacked a cigar, to enjoy the Belorussian sun (some 30 degrees centigrade) to the fullest. I had started repacking some other stuff when, unknown to me, my cigar had rolled, of the bench, on the ground. I hadn't light it yet, so it was still a good cigar.

Just when I noticed it was missing, some guy, with the biggest smile I had ever seen, picked it up from the ground, looked around and asked if it was mine. Of course, I couldn't stop the man in his hour of joy and I made clear it wasn't mine. His smile widened even more and doing a little dance of joy, he walked on.

One thing I noticed when waiting in front of what turned out to be not the hotel Minsk, is that the people, the clean streets, the whole scenery, the atmosphere, reminded me very much of how I experienced Budapest when I arrived there in 1996. I spent a year there studying, and here, in Minsk, the general 'feeling' was very similar to what I experienced there. People are reasonably dressed, there doesn't seem to be much poverty, everything is well kept and there even seems to be a sense of pride in the people.

The people are not being allowed to own Dollars. This is part of a larger scheme, set up by the government, where the country's prime minister, Alexandr Lukashenko, takes pride in not accepting any loans from the West. His philosophy is that Belorus itself should manage to get out of the slump they're currently in. At first, of course, that resulted in major inflation, but it also resulted in the people much more having a sense of having to fix their own problems themselves. A feeling that is very hard to find in Russia, for example, where, when it goes bad, again, they feel the West will help them out anyway with a new set of loans, again. Maybe Mr. Lukashenko did take the right approach in not accepting any loans. The future will tell. At least, as I noticed, the people seem to have a bigger sense of pride in being who they are.

All busses are crowded. Always. So when I took a bus to my hotel, with my backpack strapped on, more people than just me where annoyed at the size of the thing on my back. Bus tickets are little pieces of paper, that you have to put in a puncher, which will validate your ticket for the bus ride. However, only few punchers exist on any bus. Of ourse, as practical as Eastern Europeans always are, when you can't get to a puncher, you just give your ticket to the person next to you. If he can't get to a puncher, he gives his and your ticket to the person next to him. And so on. Until the tickets reach a person next to a puncher. This system works quite well. Until a ticket inspector enters the bus. Then, it turns out, about half of the people on the bus still need to punch their ticket, which of course is a major hassle for about 5 seconds and the couple of people actually next to one of the punchers. It also is a lot of fun.

Remarkably, next to every bus stop, small kiosks exist. Supplemented by small tents from which fruit, P&G and Unilever products, magazines and, oh right, I almost forgot, bus tickets are sold. Funnily enough, no kiosks exist where you can get a hot snack. No burgers, hot dogs or soups. Lots of banana's though, you can get.

So I finally had arrived at my hotel. I unloaded some of stuff and was ready to take a short tour of Miiiinsk. I had left the bad weather behind me in Poland and the 30 degrees outside did invite for some fine strolling around Miiiinsk. When I got back to town, the first thing I saw that struck me was a guy putting air into his car tires. With a bicycle pump.
He didn't seem to notice his work had no real effect on his tires.

Unfortunately, the bad weather did finally catch up with me. It had started pouring. Fortunately, the locals hadn't expected this change of weather either. All girls and young women, almost all dressed in see thru blouses where now trying to cope with the streaming rain pouring down on them. It took several hours for the weather to change again. And although the temperature had dropped several degrees, it still was warm enough to sit outside in any one of the large number of cafes, armed with plastic tables and chairs, functioning as terraces, out on the street.

Related:  Police, women, but no boat in Rostov-na-Donu

Already I had noticed the difference in how people here treated me as compared to how they treated locals. Okay, I might have a godly appearance, but besides that, it is very clear that either they respect foreigners a lot or that they know that foreigners pack a lot of money, from which, by being friendly, they might be able to receive just a small portion.

Just before I went to bed, I tried to get a beer from the bar in the hotel. All the beer turned out to have been sold, most probably to the groups of young Belorussians and (funnily enough) Caucasians (that is, people from the Caucasus) hanging out constantly in front of the hotel, and they could only serve me French wine. I took a glass at a hefty 2000,000 and had a very friendly conversation with one of the nice looking ladies behind the counter. That same lady, only seconds later, when talking to some local customers having a (very late) diner at the table next to me, showed the most grumpy face you could imagine. Still, or maybe because of that, she looked very cute!

Not wanting to spend another couple of million on a glass of wine I decided to go out for a late night walk, trying my luck in any one of the other big, ugly communist apartment blocks in the vicinity. Only one 'place' was still open though. A very crowded 'shop', next to the bus terminal, selling everything from raw fish to soft drinks and beer. But again, no warm stuff. People, generally looking pissed (as in drunk) as hell, where forming a queue that started quite a distance from the entrance of the shop. The scene and more specifically the people, somehow reminded me of the images that where beamed into the world, when Lech Walesa was leading his people into Solidarity in Poland in the eighties. Grim, pale looking drunks, willing to fight for any cause, just to kill time. I decided to turn back and go for a nap. Hey, I could even watch Eurosport in my hotel room!