The skyline of Chiang Mai from Kad Suan Kaew 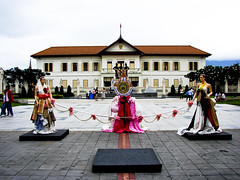 Ran into a new geo-based game the other day. Geohashing generates a new random location every day, for every graticule (that is, 1×1 degree ‘square’ on the globe) in the world, based on the date and the opening of the Dow.

I also went to my first classical concert in a long time. The Chiang Mai Youth Philharmonic & Symphony Orchestra was performing both European and Thai classical pieces at Kad San Kaew, one of the two major shopping complexes in Chiang Mai.
The show was quite reasonable, though most of the audience seemed to consist of moms, dads and siblings. At the end, the two conductors, the first violin player and the harp player were lauded with flowers. From behind the stage, a fresh young girl would show up with a bouquet of flowers. She’d give the bouquet to an older lady, who passed it on to an older man, who handed them over to the actual recipients.

In two parts the first consisted of the orchestra performing three classical European pieces. These were the New World Symphony by Dvorak, Eine Kleine Nachtmusik by Mozart and The Beautiful Blue Danube Waltz by Johann Strauss.
The second part, after the intermission, five traditional Thai pieces were performed, the last two of which were supported by SMS, The Sacred Music Singer Payap University (sic.). The program only carried the Thai names of the pieces in the second part, so I was left in the dark as to the contents or origin of these.

The second part of the performance was more enjoyable but also better done than the first part. I suppose it was noticeable that the performance were mostly teens and early twentysomethings. But particularly the last two songs, with the 24 singers in the background was nice.

I wondered to what extent traditional Thai music can actually be played on European classical instruments, but, hey, it sounded good.

Meanwhile, at Central Airport Plaza, the three Guitar Hero II machines have been supplemented by a Guitar Hero III machine and a Rockband machine, which only allows for guitar playing. And, as of recently, there now is a proper DDR machine in Thailand. It’s in the Central Ladprao Mall in Bangkok.

That’s a heading in the style of the Zangeres Zonder Naam. And Why?, I hear you ask. There’s a reasonable chance I’ll see the beaches of Mexico soon. Or at least experience the heat of Mexico City.
Yes, this AIDS/NGO sector I’m currently moving around in is not treating me badly.