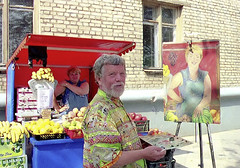 Most of the time I spent in Minsk I needed to get away again. Just before I arrived, Alexander, one of the two people whom with I shared my train compartment, had offered to go for a beer in the evening. I said that I could if I would and that I would call. I already assumed I would not and indeed, in the end, there turned out to be no time to do anything but get out of Minsk.

We arrived in the morning, so you would figure there being plenty of time to get out. Wrong. First, I went to the same place that sold me the train tickets the first time I came to Minsk. There, they told me they couldn’t sell me any same-day tickets. They forwarded me to the International train ticket office. On the other side of town. They couldn’t give me an address, since they weren’t sure, but they knew it was close to the ‘Sputnik’ hotel. Since their English was as good as my Russian, I understood that it was in the Sputnik, so I traveled to the other side of town to try and convince the receptionist at the Sputnik. She just waved me away.

I tried my luck with a young fellow working in a bar inside of the Sputnik, and he forwarded me to a black man who also worked in the bar. He spoke perfect English. Mainly because he wasn’t black but from India. He didn’t know where I should go to, but asked the first guy again, and he pointed me to a place across the street.

There, indeed, was an international train ticket office, but strangely enough, on all the time tables that hung in the office, there was no mention of Warsaw at all. Still, I stood in line and waited. For about 90 minutes. Then, the ticket-girl told me I had to go somewhere else. To another place, not to far away, where they sold tickets to Warsaw and beyond. Some walking and some pointing later, I finally found the right place. The ground floor of an ugly Soviet style concrete block, totally redone, with white tiles on the floor, modern desks and even air conditioning. Within minutes, I left with my ticket. Still, by then it was already time for dinner.

The ticket for leaving Belarus is paid in two parts. You pay for the part in Belarus and you pay seperately, in Dollars, for the part in Poland. Before getting a ticket, I had changed Dollars to pay for my ticket, leaving me with 16 million(!) Belarussian Rubles. Because I had to pay part of the ticket with Dollars, after I got the ticket, I still had 12 million Rubles. Great.

With the money I still had, I bought a number of presents for the folks back home. Several Faberge eggs, a rather strange and very big club for killing people (apparantly called a Bachuga) and some lacquared boxes. The man from which I bought the club also asked me if I was interested in buying a gun.I declined friendly.

The official rate for changing dollars is some 25% less as the street-rate. Belarussians, officially, are only allowed to exchange a very limited amount of money to dollars every year. Therefore, changing on the street is safe and hassle free. They need the dollars because of the high inflation.

ll in all, on the way back, we were checked a whole five times. Passport, declaration, baggage, passport and passport again. Since you have to wait some three hours at the border to change wheels anyway, there wasn’t really a problem with still getting on time anyway, but it did make me a bit nervous. I mean, I had some 40 CDs with me, a big club, some illegal videos and loads of photo films. In addition, my visa hadn’t been correctly stamped as it should have been. Still, everything went fairly smooth. A Belorussian woman who worked for national television helped me in filling out the (all-Russian) deceleration form after we had talked about Dostoevsky and politics, so even the hardest part went pretty smooth.

Related:  Train trip to Istanbul
This text is available under a cc-nc-a license.