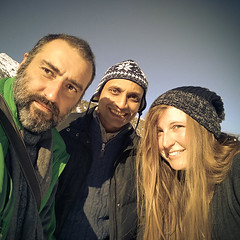 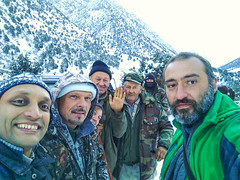 Central Asia is more conveniently visited in summer. Then, visiting remote locations and unexpectedly having to stay the night doesn’t include the risk of freezing to death.

Two places I had wanted to visit on this trip, in Kyrgyzstan, were Osh and lake Issyk-Kol. Osh is in the Ferghana valley, where three of the Stans meet, as if in a whirlpool. The backdrop of Osh, itself the oldest city in Kyrgyzstan, estimated at over 3000 years old, is Sulayman Mountain, a World Heritage Site. Flights from Bishkek can be very cheap, while a bus takes perhaps ten hours to get there.

Issyk-Kol, the second largest salt water lake on the world, after the Caspian Sea, is only a few hours away from Bishkek. But, this requires traveling through a high pass. I wanted to visit the lake on Sunday and leave Kyrgyzstan on Monday. But, significant snowfall the morning before, and the prediction of a light thaw on the day itself meant the roads could be more than tricky and the pass perhaps closed.
I considered pressing my luck, but, during a night of drinking with a bunch of Hashers, I was convinced to not take the chance and, take a few of the Hashers up on the offer to go for a hike in the nearby mountain range to the south of the city.

The hike was good, occasionally wading through a foot of snow, but the day was made at the end of our hike; we ran into a hunting party which offered us cherry vodka, cheese and some target practice with their hunting rifles, which turned out to be very loud.
I shared some cigars and we were shown the results of their efforts, three wild boar and an ibex.

Related:  On to Germany
This text is available under a cc-nc-a license.