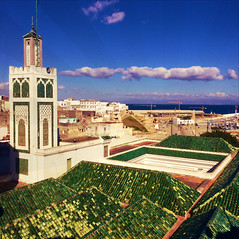 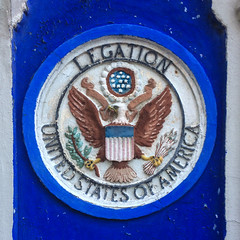 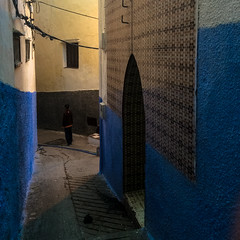 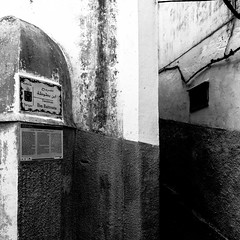 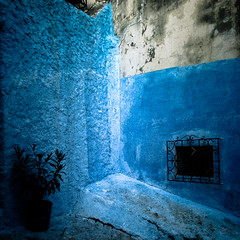 In blue
World » Morocco » Tanger » The tomb of Ibn Battuta

Home to the grave of Ibn Batuta, you're welcomed, coming in by ferry from Algeciras, by a huge text written in the side of a mountain: God, kingdom, home (or fatherland?).

The easy journey is to take the ferry straight into Tanger, but a considerable discount can be had if you're willing to head to Tanger Med, the shiny new port some 40k away from town. Touts used to walk over unsuspecting foreigners here, but now, the whole place feels like an abandoned airport.
From Tanger Med, a train travels a few times a day to town, but busses are more frequent, if little is signposted, requiring to ask around. French is still an asset, though I found that, often, English or Spanish were more useful.

The old town of Tanger is not nearly as attractive as, say, Fez, but still has something of a charm. Relatively few foreign tourists visit, suggested by only the occasional cafe or restaurant catering to tourists, even though there's a large number of hotels (mine had two tortoises walking around on the roof). But, it seems, outside the two market streets, much of the old town is primarily a jumble of living quarters. Fairly modern, fairly run down.

The star attraction of Tanger is the tomb of Ibn Battuta. Born in the 14th century, he traveled extensively in the then thoroughly connected Muslim world, and beyond, making him the first widely traveled tourist. Sure, Marco Polo beat him to China, but he was traveling as a merchant.
I paid my respects at the small tomb, which still has a caretaker, an old, nearly blind man. I was allowed inside to contemplate my traveled existence, while a lady who passed by and saw me paying my respects, started chattering to me in Arabic.
For travelers, visiting Battuta's tomb should be like paying respects to the patron saint of globetrotters. It's amazing the tomb is not only still there, after nearly 700 years, but is actually actively maintained.

Afterwards, I enjoyed the sunset from the ramparts of the medina. The sun setting on one side, Tarifa, on the south coast of Spain, on the other.

Strangely, I've seen several, what appeared to be locals, with dogs as pets.

On the Friday, as all the mosques were calling the faithful to prayer, I walked over to the 'thieves market' to see what would be on sale.
Most of the shops were closed for prayer, but a few of the food stalls were serving. I ended up wedged between a dozen or so traders who had closed their shops but seemingly had foregone a visit to one of the nearby mosques, scooping up a mix of salads with fresh bread, topping it off with freshly fried small fish. Delicious, and at a fraction of the cost of a meal in the old town, where sit down restaurants seem to primarily cater to tourists.
Later, I stopped at a Senegalese restaurant for dinner. They had a menu, but where serving only one dish.

There's a noticeable Dutch presence in Tanger. A seaside Cafe serves Croque Hollandaise, explaining them be uitsmijters, for the initiated, and several of the beach side clubs have names that betray a Dutch connection.