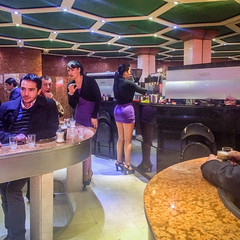 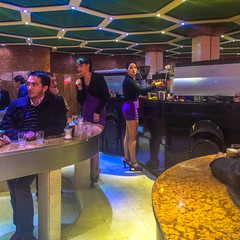 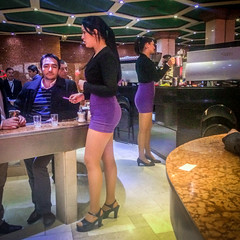 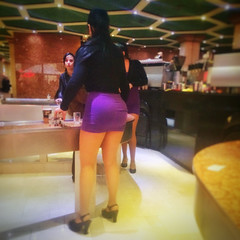 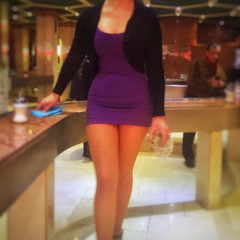 Probably the most unusual aspect, typical of Santiago's Central Business District, is the institution of 'coffee with legs'.

Though some of the best coffee in the world comes from the continent, chilenos have only very recently started to cotton on to the joys of coffee. This change happened in the 1990s, when a few local entrepreneurs had enough of the struggle of finding good coffee in town, starting, eventually, several chains of cafes where, to attract chilenos to the underappreciated beverage, staff consisted of an array of attractive women, showing of their long legs and fit bodies. A success with the men, these cafes now occupy high street locations and serve coffees at more than reasonable prices.
The women, serving the coffee, do so from a raised platform behind a bar that has no back wall, often in a room full of mirrors. The raised platform also means the women have to bend forward when serving coffee, showing off some of their assets.
Interestingly, the chains of legged coffees have names that refer to the Caribbean. Perhaps to strengthen the association with scantily clad women?

The more recent addition to the chains of coffee shops, Starbucks, popular in the affluent suburbs as well as the CBD, does not follow this trend, serving much more expensive coffees, but attracting a clientele the coffee with legs fail to corner; women.
Apparently, some of the coffees with legs experimented with handing out free coffee to female visitors, with mixed results at best.

But, it gets weirder. One step up (or down) from the high street cafes are the cafes tucked away underneath office buildings, inside covered promenades. Or, even further afield, in streets you might think distant branches of the city's red light district. These cafes, behind tinted windows and only marginally lit up inside, feel like strip clubs. The women are dressed pretty much the same as, say, girls in a Thai dance club. And, this is perhaps where employees go to retire; the women are more than middle aged, overweight and, well, not very subtle.
When you enter, a lady is assigned to you, welcomes you with a kiss and continues to serve you your drink. Which will be a coffee. She'll strike up a conversation and might ask you to buy her a drink as well. A coffee.

There's what might be an urban legend where these less-mainstream cafes have a 'happy minute', chosen at random and once a week, where all staff fully undress for one minute.

Chile, like much of Latin America, is quite culturally conservative, but, though this is no Brazil, clearly has a relationship with sexuality that's not quite European. Even if, to me, Chile seems the most European of Latin American countries.

Note that the concept of coffee with legs is not exactly unique to Chile. The north west of the U.S. has bikini baristas.