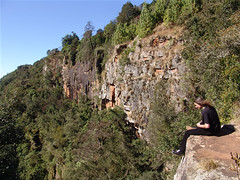 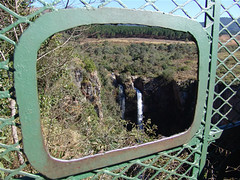 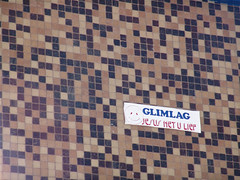 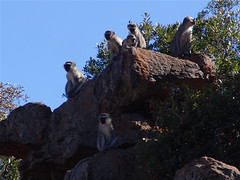 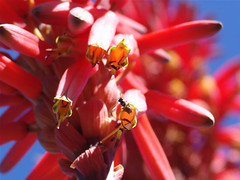 Most of the trip from Jo'burg to Nelspruit (and to Graskop) is through the lowveld. Currently quite yellow in its dryness, resembling, say, the French plateau in summer: gently rolling hills under a hot bleaching sun.
Closer to the 'Klein Drakensberg' (the big Drakensberg being the border between Lesotho and South Africa), the area resembles a more gentle, less rough version of the Eastern Highlands in Zimbabwe, even though here, the mountains do appear to be higher. Also, there's a lack of English style cottages here that are littered around the Eastern Highlands, most of the occupants here being of Boer origin.

At night, it's freezing cold, but already early in the morning, under the blue sky and shining sun, temperatures rise quickly enough such that walking around in a t-shirt is almost a requirement. The view from where we're staying, the Panorama Ruskamp is amazing, the same view that hordes of tourists come to the Klein Drakensberg for at the viewpoints of, among others, God's window and Wonder View: a horizon over 100 kilometres away from on top of the steep cliffs some 1000 meters above the veld.

On both Friday and Saturday night, we went down to what's pretty much the only bar in Graskop, the Loco inn. Also a restaurant where locals pick up eisbeins as if it's just another snack in-between meals, Afrikaanse sokkies (dance music) were played constantly with the crowd going wild.
As the last restaurant, the Chinese takeaway, closes at 9pm, even on a Saturday, all Graskop's Chinese were also at the bar shortly after. A young Chinese couple with baby, the woman from behind the counter, the man from the kitchen, A slightly older Chinese man in an ill-fitting suit, Mafia, no doubt, and a cute younger girl all dressed up in short hip skirt, a tiny bag, hair tied in a pony tale and dancing as if it was the 1960s. She, too, went wild on the Afrikaanse sokkies, the men standing in line to take her for a spin, during which she couldn't stop giggling.
The Chinese girl's rivals on the Saturday night were two piglets, practising for next week's motor show when, no joke, over 10.000 enthusiasts will close in on the town.

Graskop is tiny, with basically not much more than two main streets, one 'black', more run down, people selling stuff from the pavement every day of the week, and one 'white', lined with B&Bs, cafe's and exclusive shops.
The only whites left seem to be pensioners, the young ones having left to try their luck in, I suppose, Nelspruit, the Cape or Gauteng. It begs the question what will happen in 10 or 20 years when all the shopkeepers will have gone on to greener pastures, leaving their business ventures to whom? Their children or grandchildren? I don't think so. Even though there's quite a bit of tourism in the area, if a younger generation would be interested in working in tourism here, they would have already done so.

On Sunday, we learned that it's a small country after all, as we bumped in to two of Betsy's colleagues down at the Mac-Mac falls. We had a few beers in Sabie, where Mark had to hug one of the local (older) women in exchange for a drink. The lady wanted to impress her friends with a foreign hunk like Mark.

On the way back, we passed through Lydenburg, where we wanted to see the 'Lydenburg heads', supposedly from the 5th century. The museum was closed, 'due to power failure' and when we got out of the car and walked around, within minutes, armed response stopped at the museum checking what it was that we were doing. Good, I suppose, but rather weird that, while the museum was closed, the front gate was left open, as was another gate that led into a game park on the same grounds.

Related:  Christmas in Durbs
This text is available under a cc-nc-a license.