I've fallen, and I can't get up 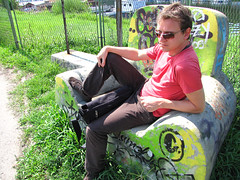 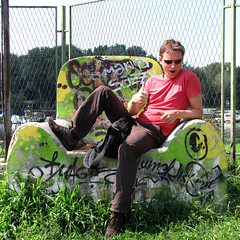 How do you feel?
World » Serbia » Belgrade » Ada Ciganlija

After a mere two days in Belgrade it seems safe to say that the city's, perhaps the country's, unique selling point, is its people's excellent mood. Every single cafe, bar, restaurant and snack bar (do you notice a day's progression here?) we visited, we were met by the most friendliest of owners, waiters, cashiers and servers, to the extent where one even ended up tipping us, instead of the other way around. And that was even without providing any service from our end.

Belgrade has a seaside, well, beach, which is probably the most popular recreational destination in the country, reportedly serving as many as 300000 visitors on a weekend. And though yesterday temperatures only started to rise in the late afternoon, today's forecast saw predictions run as high as 36 degrees. We had to get to the beach.
Besides the views, coffee, palinka and vinyak provided pleasant reasons to spend the bulk of the morning as well as the start of the afternoon. We followed up our sunny visit with a walk the length of which should have been reason enough for us to be awarded handsomely.

From Belgrade beach, we walked along the banks of the Sava river, towards the Danube, to cross on the first available, but fourth passed, bridge, only to try and satisfy our curiosity as to what the insides of a mall in Serbia would look like.
We failed miserably. Our 7km walk, resulted in us visiting the Sava Centar, what looked like a proper mall, and was listed as such, on the map we had picked up the day before at the train station. Not so, more resembling a communist show piece, with fancy little shops all over, but without shoppers.
We followed this up with yummy sandwiches, salads and pasta at a nearby hole in the wall. We needed the reward, underscoring the fact by taking a short walk towards the abandoned looking Belgrade Arena, which will see the arrival of Guns 'n' Roses in the near future, where we had a lovely set of espressos at a tiny, but rather cosy bar, called Obelix.

Related:  The capital that is not a white grave

Bar, arena and the mall with an identity crisis are all located in what is called New Belgrade, something of a socialist planner's paradise. Part 60s housing show piece, part modern office tower nirvana, it also contains the Palace of Serbia, a rather drab 60s idea of what a cool construction should look like but also something that didn't compare well with the more modern constructions seemingly closing in on it.
We finished our day at the excellent Red Bar, on Skadarlija, which is in an area lovingly nicknamed Monmartre and indeed does have some resemblance, cobbled streets and all, and also hasn't been spoiled yet, sporting extremely reasonable prices, good restaurants and, again, very friendly staff.