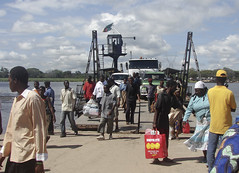 Crossing the Zambezi from Zambia to Botswana 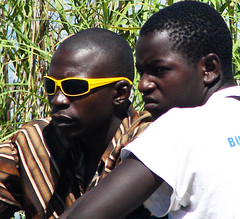 Not far from Livingstone, four countries almost meet, but not quite. The Chobe and Zambezi rivers meet, shortly before the Zambezi river is split by a sandbank. The distance between these two natural formations is only a few hundred meters and it’s these few hundred meters which make up the border between Zambia and Botswana. In fact, because there’s no formal border agreement between Zambia and Botswana, the de facto Zambia/Botswana border is actually the gap between the the two nearby tri-nation border points.
To the west, the area between the Chobe and Zambezi rivers, is the Caprivi strip of Namibia. To the east, the earlier mentioned sandbank, is an outlier of Zimbabwe, though the actual border between Zimbabwe and Botswana runs east and south of the river split (thanks to aletheia kallos).
Indeed, in a few decades, if the courses of the rivers manage to change slightly and if the countries in question decide to update their borders accordingly, this might end up being the only place in the world were four countries actually meet. If the four countries would truly have met in one place, this would be called a quadripoint and there’s currently no international quadripoint where four countries meet in existence. Two quadripoints where fewer than four countries meet do exist. The first involves the Belgian enclave of Baarle-Hertog inside the Netherlands, the second the Austrian town of Jungholz inside Germany.
Aletheia, in the comment below, points out the potential existence of two secondary quadripoints on the Indian subcontinent. A secondary quadripoint is where four political subdivisions meet, not necessarily countries.

Related:  Fit for a queen

Google Maps doesn’t get the borders exactly right, but you can see how close the four countries come to meeting up at a quadripoint.
The Caprivi strip was named after German Chancellor Leo von Caprivi, who negotiated the land in an 1890 exchange with the United Kingdom. Von Caprivi arranged for Caprivi to be annexed to German South-West Africa (now Namibia) in order to give Germany access to the Zambezi River and a route to Africa’s East Coast, where the German colony Tanganyika (now Tanzania) was situated. Although Livingstone had already found the Victoria Falls by then, it apparently hadn’t come to von Caprivi’s ears as, of course, the Zambezi is impossible to navigate across the falls.

The ride from Livingstone to the border is not even 90 minutes, the ferry takes only a few more and then it’s just over 10 kilometers to get to Kasane, on the Botswanan side. There, I was to meet Christo and two Dutch friends of his who were staying in the Chobe Safari Lodge. The Dutchees had claimed accommodation would only be some 30 or 40 euros per night.
I had done some online research and had gotten a bit worried. Prices for accommodation in and around Chobe national park seemed to range from 200 to 500 dollars per person per night. Indeed, this part of the region is catering primarily to very wealthy travelers.

When I hooked up with Christo, Dominique and Sander were out on a game drive and Christo seemed a bit downcast. Luckily, the rate wasn’t as bad as I feared, but still a good 100 dollars per night. That, combined with paid-for meals ranging from 12 dollars for a breakfast buffet to 16 for dinner made it quite a pricey undertaking to stay.

I traveled the two hours between the two cities with Mike, a chess teacher and freelance journalist on a sabbatical touring the globe. The lucky man was offered two nights sleep in one of the tents Christo had brought from Johannesburg. Accommodation doesn’t go for under 40 dollars in Kasane, but camping spots go for less than 10 dollars per night.