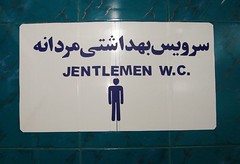 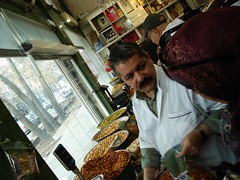 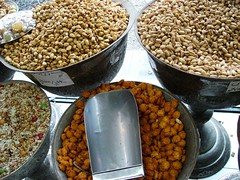 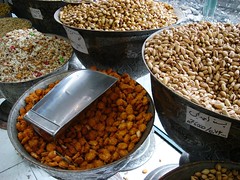 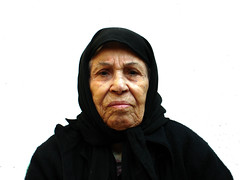 I fully have the intention to come back next year, preferably late summer and/or early autumn so that, finally, I can experience some good weather in the areas where it matters. But I have to admit that, at several occasions, I’ve had the strong feeling that it’s going to be a while before I’ll return to Iran. Don’t ask me why, it’s just a feeling.
An Iranian friend of mine had heard that the exception which allows me to visit the country three months every year will be abolished as of early next year, but a call to some ministry in Tehran refuted that. However, I don’t think that that’s the end of it.
Then again, I can only cross that bridge when I come to it. Although I would prefer crossing that bridge while not, already, in the Iranian army. It doesn’t have too great a reputation, you know. Only as little as 20 years ago, about a million of them just died. Well, all right, that was in the middle of a war, but still.

At one a clock at night, there’s a distant part of Tehran where, on the slow lane of an empty highway, people are selling paintings.

And a historical bit

I recently spoke to a Dutchie who’d been travelling in Iran and had talked to a few people who claimed that the Shah’s downfall was mostly due to him not suppressing, killing, enough people. Hundreds, in stead of thousands and that, if only he’d been a little bit more cruel, Iran still would have had a shah.
Besides the numbers being nonsense, the Shah’s secret police, SAVAK, had 1000s of people killed, what I think the reason for these people to transfer the blame is to put responsibility for the current state of affairs on someone else’s shoulder. This country is in the state it’s in, because of the actions of a generation who struggled for power during the revolution and the following hostage crisis, around 1980. The blame for those people’s failure to bring enlightenment lies, of course, purely and only with those people, but at the same time with everyone else in Iran as well, as every other individual, not striving for supremacy in one of Iran’s governing bodies at the time, was also responsible by letting these same people get away with corruption, intimidation, murder and general incompetence. And by putting the blame on the last Shah, very conveniently, everyone’s hands are suddenly washed clean.

Related:  One year on
This text is available under a cc-nc-a license.