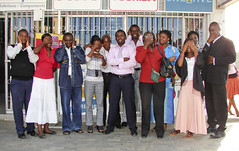 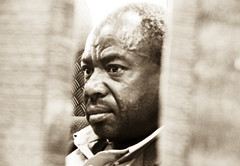 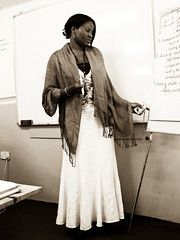 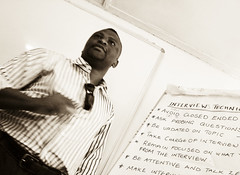 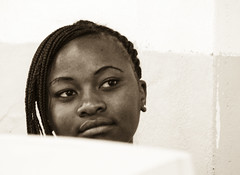 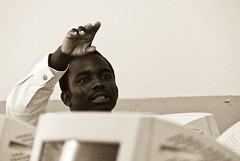 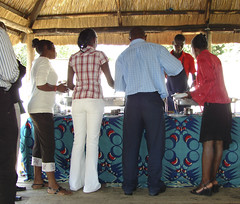 At the lunch table 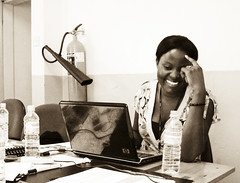 Partook in two days of training for HDN, in Zambia. The country coordinator did a very good job, but not everyone was as committed, and I am not talking about the trainees.
For the second day of training, which was my day to talk about and train on HealthDev.net, we obviously needed decent internet connections. The IT center we did the first day in had, for some reason, issues with their internet connection. I asumed we’d scout for alternative location after the training, but not so.
On the second day, the internet not having improved at the training center, the country coordinator and I had no choice but to scout around for an alternative location, with the regional coordinator being ‘held up’. In the end, we started the training at 11:30, at a local internet cafe. Only three hours late.

To compensate, the country coordinator and I, at the end of the day, decided to head over to the Dutch embassy to see if we could gatecrash a supposed party in honor of the Dutch queen’s birthday. Almost, as the party was at the ambassador’s residence.
Another taxi ride, and we literally walked in to a red carpet event. Hundreds of guests, including the former almost-dictator-for-life, Kenneth Kaunda, elderly African statesman if ever there was one.
Raw herring, cheese, bitterballs and more. A decent end to the day.
Until we chartered a taxi back to town, which saw us stranded in the middle of nowhere.

Kenneth was walking around in a black safari suit, with an AIDS awareness logo stitched to his lapel. Very cool.

Related:  My Thai
This text is available under a cc-nc-a license.