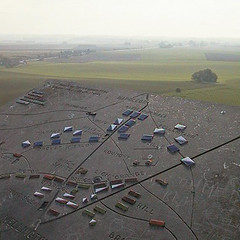 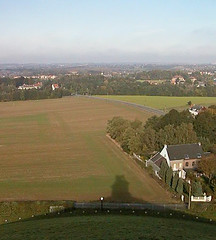 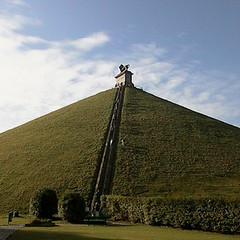 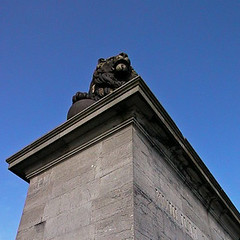 Betsy and the fields of Waterloo
World » Belgium » Waterloo » Battlefields

All good things come to an end. We took a train back from Ljubljana to Venice on Saturday. We had two options: One leaving at 4am and one arriving at 9pm. We opted for the second one, arriving late. This being an October Saturday night, in Venice, we weren't able to find a place to stay. We should have known from the previous week. Going to the camping we stayed at a week earlier also wasn't an option since we had to catch the shuttle bus to the airport at six the next morning. Simply not a possibility, leaving from the camping.

We considered a drinking spree, moving from bar to bar, but at 2am, all that was left was an all-night club that charged 10 euros for loud music in a crammed room. No choice but to be a bum for the night: We spread out our sleeping bags just outside the main entrance of the city's train station and fell asleep quickly. That is, I did. My girlfriend stayed awake most of the night. We weren't alone, though. Some thirty other backpackers were also stranded at the train station, waiting for the morning to come. And then there were the professionals, with their cardboard boxes and shopping carts. We were in good company.

Driving back from Charleroi airport, welcomed by sunny autumn weather, we reflected on our trip to Venice and Ljubljana and decided that, although not everything went as smoothly, we still had a great time. We stopped by at Waterloo, where Napoleon had his defeat in 1815 and shot a couple of nice pictures before rainclouds started drifting our way.

Related:  Brussels
This text is available under a cc-nc-a license.