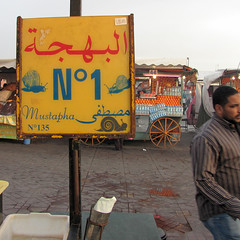 The last stop on our trip is Marrakech, Hollywood stars’ favorite African getaway, though orphans aren’t too easily picked up in these parts (and certainly wouldn’t trigger the same emotional response those poor undernourished black buggers do). Prices are much higher, both for sleeping and eating, compared to our other stops in Morocco, not in the least because several low cost air carriers now shuttle between Marrakech and different parts of Europe.

Originally, I wanted to complete our circular journey by taking the bus from Fez to Marrakech, at nine hours a rather unpleasantly long undertaking. Fortunately, common sense prevailed, and though I don’t like backtracking, the eight hour train journey, taking us through each of our previous destinations, is shorter, cheaper and more comfortable.
The scenery on the train journey from Fez to Marrakech is also gorgeous. Even now, at the start of winter, the rolling hills and sweeping vistas display gorgeous and superbly green views.
Funnily enough, the train’s automated announcer is introduced by standard samples coming straight out of Microsoft Windows, each time she starts talking being presaged by the sound for a new message arriving in your inbox.

Marrakech, unfortunately, is a disappointment, as far as first impressions go. The central square is so crowded, and predominantly with foreigners, and so busy, in a disorganized kind of way, that it feels like the world is about to end, right there, and that everyone has come to watch.
Not French, but English is the primary language after Arabic, prices, of everything, are way to high, the medina’s streets are open to motorbikes and cars, here the streets are wide enough, and the medina itself feels sterile, with the outer edges particularly characterless. It’s as if Marrakech is the west’s idea as to what a Moroccan medina should look like: selling everything under the sun, but neatly laid out, with here and there a local woman garbed up in head scarves, while the visitors can slosh around in t-shirts and short skirts while ordering food and drink in their own language.
I’m glad we visited these other Moroccan cities first, before coming here, showing us a bit more of the ‘real’ Morocco.

Our first impressions of Marrakech made us want to visit Essaouira, until old friends told us they were gonna arrive in Marrakech just after the new year.