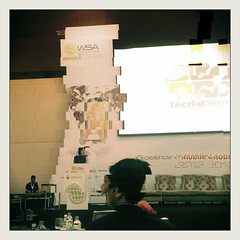 The reason for heading to Abu Dhabi was Dérive app being selected as one of the winners of the World Summit Award, a UN-backed, UAE-sponsored event promoting solutions in mobile technologies. The event was held at the Jumeirah hotel at Etihad towers, an extremely opulent hotel of over 60 floors. Our bathroom, with a freestanding tub, on the 40th floor, had a near 180 degree view of the city's shoreline. Still, even though the walk-in rate is 300 euros, rooms can be booked online for a not-so-outrageous 180 euros for a double.

The conference itself was not overly interesting. Many of the speakers were rehashing old news, while a session on mobile activism, in a fancy hotel in a country that stiffles political opposition, was laughable, mostly talking about commercialisation of mobile apps. But that perhaps was more due to the UAE's fear of giving local political dissidents the 'wrong' ideas.
The catering was superb, though a bit too much of the organisational planning left to be desired, possibly in part because the actual organisers are based in Salzburg, while the local partner is possibly more interested in the political clout that actually comes with organising the event. Not from the perspective of the participants, but for outsiders.
Perhaps this is underscored by the apparent lukewarm interest in the international tech press, let alone the conventional press, of the WSA.

Still, having said that, the WSA was a success for us at Dérive app. We did not become 'champion' in our category, m-Tourism and Culture, that honor went to Harpoen, but we made a host of valuable contacts and were able to focus our strategy through the people we met and conversations we had.
And we had superb breakfast, four times in a row.

Related:  The most pleasant Caucasian capital

Also, there's the WSA (non-mobile) coming up in Sri Lanka later this year. I suppose we'll have to try to get in. Who doesn't want to go to Sri Lanka?