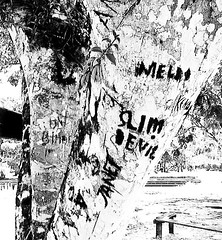 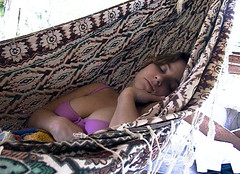 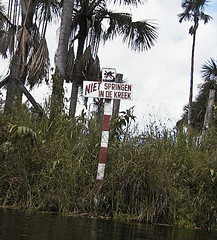 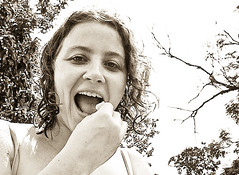 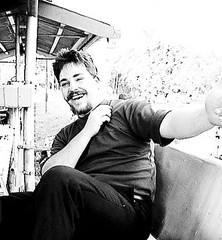 You can't consider yourself Surinamese if you never pine to go to your 'boiti' on weekends. Be it one of your own, of the family's, or some kind of resort. Although Suriname has a 200km coastline, people don't relax on the beach. Often, the coast is not reachable, used as a dumping ground for used cars, washing machines or worse. If you want to relax and enjoy the sun, you have to go inland. Mostly on the line between the airport and Paramaribo, you can find small resorts, often centered around part of some creek, livened up with a couple of huts and the occasional food shop. However, you also can't consider yourself Surinamese if you do go to a boiti every weekend, but don't bring your own cooler with food, drinks, barbecue meats and more.
â€¨Already the day after our arrival, Danny and Annerine took us to Cola Kreek, close to the national airport. The name does actually refer to the drink many love. The water, clean, but brown, gets its shade from fallen leaves who, basically, rot in the water, leaving behind a darkish color. Since it was a regular weekday, we were the only ones there.

â€¨â€¨We were welcomed by a black guy, singing songs and standing up to his waist in the creek, moving a stick from left to right as if he was rowing a boat. It turned out the guy was looking for gold, using a fork to scrape the bottom of the creek, to see if anyone might have dropped any jewelry. By the time we left, he was still happily singing and hadn't caught a thing. Then again, if he had caught something, he wouldn't probably have told, since then there would be a chance of us returning the next day with our own fork.

Related:  A visit to Andorra

On the road to Cola Kreek, you can't miss the many abandoned trains in the small village of Onverwacht, completely overgrown. Shortly after independence, the few train tracks the country had fell in disuse and although someone tried to revive the Paramaribo – Zanderij line in the 80s, nothing much happened.