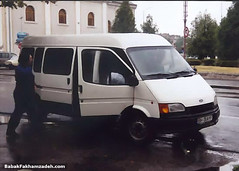 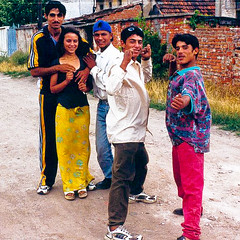 Bumping in to a bunch of, for a change, friendly Roma (gypsies) 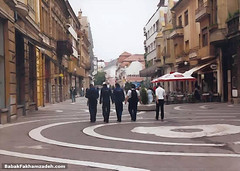 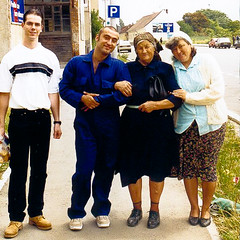 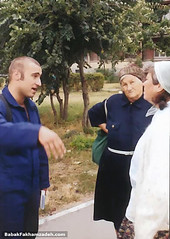 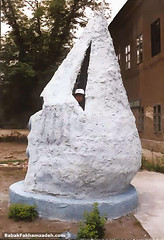 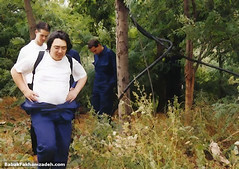 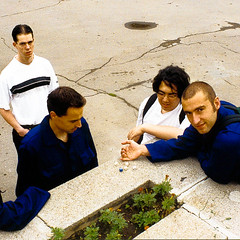 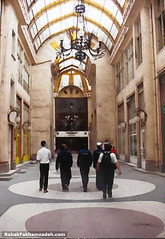 Inside the Black Vulture

Are we being followed?' 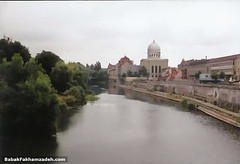 And in the background, an out-of-use synagogue 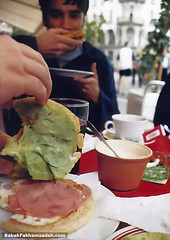 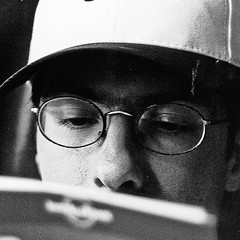 'So Ovid was burried in Romania...'
World » Romania » Beius » Accomodation

After trying to come to terms with the sights Oradea had to show us, a no-longer-used synagogue, a ruin of a fortress-now-an-art-school, a larger than live vulva and 'the black vulture', and after meeting with some English speaking local women, both of whom were widows, who tried to make really good friends with Art and myself, we arranged for being picked up by Emil, our Habitat contact in Romania. That, as it turned out, meant waiting in the rain for three hours.

I had called Emil to make an appointment for being picked up. A blue van was going to pick us up next to the church on Oradea's main square. No bus showed up for several hours. However, since I had already started to grow familiar with the more, say, Mediterranean style of life in Romania, I wasn't really worried. Still, waiting in the rain does make you feel rather irritated and when I called Emil again I learned, not only that he wasn't allowed by his phone operator to call abroad (I was using my own Dutch mobile), but, in stead of a blue van, they were sending a white van. In addition, we ourselves found out there was another church around the corner. There we finally found our van.

The trip to Beius was as bad as it gets. Not that the van was in bad condition, but the road was terrible. Potholes everywhere, no asphalt, dogs, heavy rain. All in all, it was a pain. This trip, although a little bit shaky, also made it the perfect time for a nap. Some two hours later, we arrived at our destination. Beius, Romania.

We didn't stay in a Habitat-built house, but at a regular farmer's who, in his spare time, had built a fairly big private dwelling. Both he and his wife spoke very good French, so we were able to communicate fairly well.

Remarkably, when we filled up the house, first our bunch coming from Budapest, then later the rest coming in from Bucharest, the two owners slept in the basement. Right next to where we had our evening drinks, regularly changing into late-night drinks. I guess they both slept a lot during the day. Mind you, not that we had to pity the couple; they were receiving, for Romanian standards, very good money for us being there.

We were all happily surprised when hearing that, besides a youngest son of 17, the couple had two older daughters. Sadly enough, we never got to meet them. Very convenient, since already on Monday evening, Art scored one of the locals.