A street corner in Phnom Penh 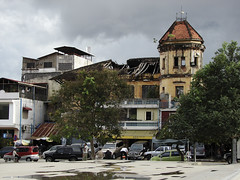 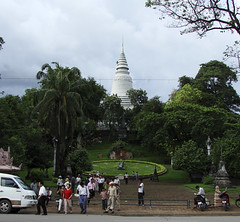 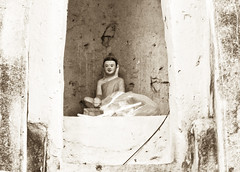 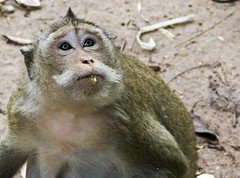 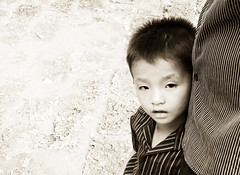 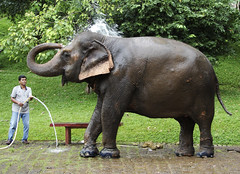 Sam Bo made a big splash 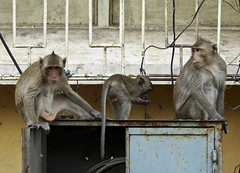 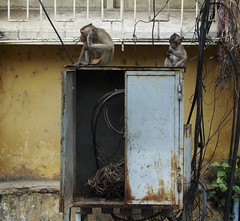 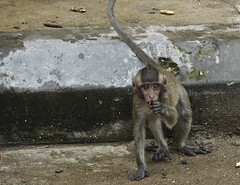 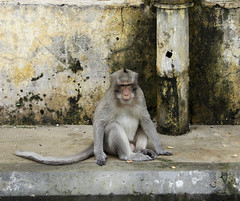 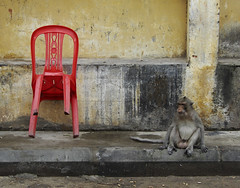 Taking the bus to Phnom Penh, a six hour journey, the same as when you travel by boat, but at a seventh of the price. The road is excellent and the bus reasonably comfortable.

On the bus, I sat next to a Khmer lady, wearing cap, sunglasses, longsleeves and gloves (when outside), who spoke more than passable English. She managed the (apparently) only five star hotel in Siem Reap, frequented mostly by Japanese, Taiwanese and Koreans. The rooms go for around 250 USD per night.
A conservationist, a Khmer guy who worked on restoring one of the temples in the Roluos group, earned 40 USD per month.

My first impressions of Phnom Penh were not as good as I hoped. True, the place still has a bit of a colonial feel to it, but the whole city is rather run down, without the vibe a city like Maputo has, of which Phnom Penh reminded me on a few occasions.
My guesthouse, the Woolly Rhino, is on the waterfront of the Tonle Sap river. And that whole waterfront, lined with tourist oriented bars and restaurants, is a bit sad. Most of the actual waterfront is shielded off by a two meter high metal fence.

I visited Wat Phnom, which means ‘hill temple’, on the only hill in the city. Supposedly, the first temple in town, built by a lady called Penh (indeed) in 1373, after four buddha statues washed up in her home due to a flood.
Besides the beggars and kids selling water, an elephant called Sam Bo hangs around, as well as scores of monkeys. Some of the girls were wearing a t-shirt which read “I could be your son”.

Related:  Monk-ey business
This text is available under a cc-nc-a license.