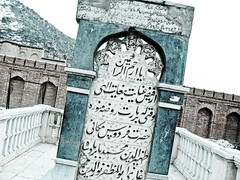 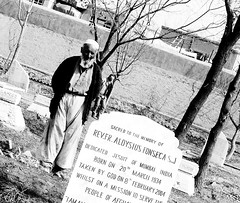 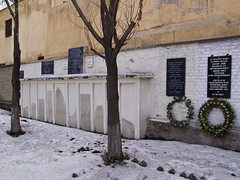 At the foreign cemetery 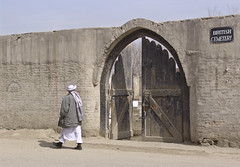 Entrance to the foreign cemetery 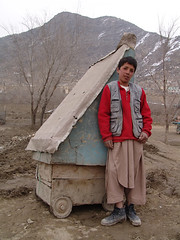 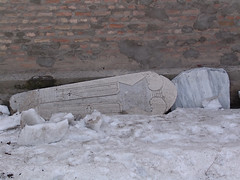 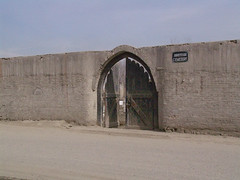 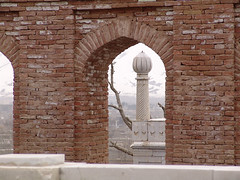 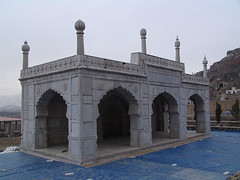 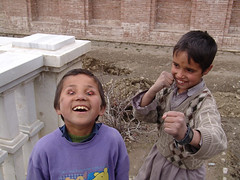 Giovanni went off to work today, as usual on a Saturday, taking the car with him. Not a problem, given the most excellent weather. Just when I was to leave for a walk, Jagoda, a friend of Lyn's who had joined me on the Hash, called to say she had lost her phone yesterday and was considering she lost it in front of our house, when her driver dropped Lev and myself off after returning from the run.
My first stop was our street corner, struggling in Farsi (but managing quite well, I thought), explaining I had lost my phone yesterday and asking if the sellers on the corner had seen or knew anything. Of course they didn't and I continued on my way to the 'British cemetery.

The cemetery is only occupied by a handful of foreigners who died in Kabul over the last 100 years or so. The latest memorials were put up for ISAF soldiers who died on missions in the country.

After the cemetery, collecting both the car and Giovanni from the DACAAR offices, we drove down to Babur's gardens. Built by the Moghul shah Babur, as a grave site for him and his wife, the gardens were, at some point, spectacular. And although they started renovation some two years ago, they still have a very long way to go.
We arrived just after a good cockfight was finished and had to do with the standard batch of annoying kids, trying to make some money, cleaning your car, talking to you in Hindi or just plain and simple pulling your shirt and asking for baksheesh.
We managed to fight our way through, only mildly injuring some five year olds (hey, kids' bones heal easy anyway) before heading back, stopping at the French bakery along the way. They have good bread and cakes, but their winner is the home-made yogurt. Kick-ass finesse.

Then, before dragging ourselves through the dust clouds that were traffic, we also stopped at the Hotel Intercontinental to visit the DACAAR store. Here, Afghan refugee women living in camps in Pakistan sell their embroidered works.
The quality is very high and the hats, cases, shirts and shalwaar kameezes are very, very fine. However, things are also not as cheap as you might expect. Still, Giovanni bought both a pakul and a body warmer and I will definitely return before I leave this land of the blue sky.

Meanwhile, Shandiz, the Iranian restaurant, is starting to be my favorite hang out. It is the only restaurant which I've been to, so far, which actually looks like a real restaurant. All the other places, many of them serving decent food, are regular houses, converted to restaurants. Meaning the rooms are small and crowded and the ceilings are low.
It is also the best restaurant I've been to, so far. Although the vegetarian dish is crap: I was expecting spinach but got canned mushrooms, beans and chick peas. The other dishes are mouthwatering good. And they have sheesha.