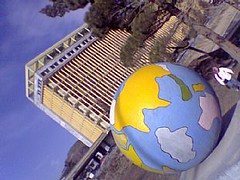 I’ve been struggling quite a bit this week. Not because the work is bad, but mostly because my PC has not been acting as if it wants to be friends with me. On Sunday, my PC started to break down. On Monday, it completely crashed and it took me till today, Thursday, to get back up to speed.
It’s been a struggle. Not only because, although my laptop has one of the few legal licenses within DACAAR, I still had to activate it by calling Pakistan, getting an, of course, pirated copy of Norton Antivirus to work was a real pain. Nevertheless, slowly slowly, my PC has started to function again.

Meanwhile, you might have noticed that this blog’s entry on Dubai and the two most recent on Kargha dam and the recent hash have become very popular. I haven’t yet deduced where these visitors come from, but I have a feeling that the rather buggy service from Technorati is running rather badly managed overtime.

On Tuesday, we had dinner at Alexandra’s place. She had managed to get together a quite colorful combination of expats for a meal, prepared by Sikander’s cook, an Afghani who had cooked for him while he was working in Pakistan. Basically, the Afghani has learned how to cook Pakistani/Indian dishes.
This night, making dinner for 10, the man had outdone himself, making all sorts of very, very decent dishes. Maybe the man is for sale?
Dinner at Alexandra did mean we had to miss the free buffet at Mustafa, something that has already been adopted as a ‘sad bastards dinner’ by the hash. Next week.

And the weather is starting to become really pleasant too. During the day, it can already get up to 20 degrees in the sun, if you manage to stay out of the winds. And lighting up the bukhari at night is now only pleasant, no longer required to be able to go to sleep.
Meanwhile, nature has seemed to hit back with your average, run-of-the-mill dust attack. But nature still has some months to improve on her dust-making.

Meanwhile, I’ve caught a cold. Something several people at work are also currently suffering from. Struggling all day, today, added pain was my arrival, last night, at 2am, after partying way too long.
The evening started at the Dutch embassy, where every first Wednesday of the month, the ambassador holds an informal social event. Crowded with military in army fatigues, I felt under siege but had some nice conversations, even meeting a girl, working for the embassy, whom I turned out to have a fellow acquaintance with in Delft.
After that, it was a very decent but rather expensive dinner at Springfield, together with DACAAR’s financial manager, an Italian who talked like Tony from the Sopranos and two Iranians, one guy working for PWC and one babe, Maryam Shahriar, a film maker. Then, after stopping at l’Atmosphere, we headed off to Cascades, where we played crappy pool before heading home. I was wasted and sooooo tired.