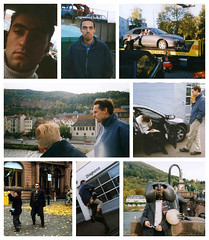 In October 1999, four people went out to buy some clothes and all they came back with was a broken down Fiat.

The clothes were picked up at the Hugo Boss outlet near Stuttgart. In the process, we also visited Luxembourg and Heidelberg.

The broken down Fiat was a replacement car for Joost's vehicle with which, according to the mechanic which looked at it, was completely unfit to go back on the road with. The Fiat Palio, although practically new, was a ramshackle device, nearly falling apart under my hands. My hands, indeed, because it turned out I was the only one who had brought my driver's license…

Note (May 2008): The original travelogue of this trip came online in December 1999 and was the first travelogue I put online myself, earlier even than my travelogue of my trip to Russia, which I did in the summer of 1999. In a way, you could say, this was the travelogue which started it all.

Unfortunately, with the many hard disk crashes over the years, the photos from this particular trip are amongst the very few which completely disappeared from my archives, so I threw together the low res, high compression photos from the website into a small collage.

Related:  Long time no see
This text is available under a cc-nc-a license.