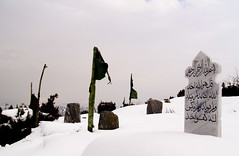 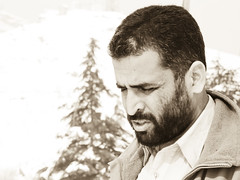 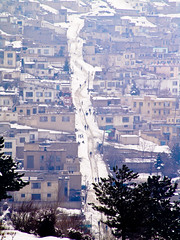 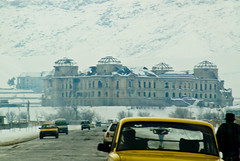 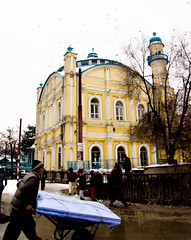 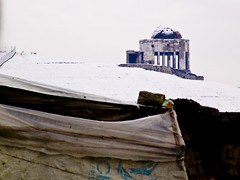 The morning and half of the afternoon was spent driving around town with a set of visiting Danes. Khalid, a DACAAR employee, drove us around town and showed us the sites. Of these, there aren't many. The list of sites includes things like 'the simple stadium used during Taliban rule for public killings and mutilations', 'the bombed out palace of the former king', 'the university hostel' and endless rows of houses, bombed to bits, without electricity or water, but with inhabitants.
It's amazing to see where Kabul is coming from. The Soviets not only built an airport, they created a reasonable and functioning city and system, complete with trolley buses, plumbing, electricity and more.
Surprisingly, I haven't found a city center yet. This also hampers my ability to mentally understand the layout of the city since there doesn't appear to be a really good reference point.

Originally, the plan was to join some people from work in a visit to the hamam. However, due to my morning tour of the city running late, I couldn't make it. Not to worry, since the Hamam closes at two anyway. Exactly the time Alexandra, Martine and some other guy went over to visit the hamam. Of course, the Hamam is strictly separated.
During the tour, I asked Khalid if he new any good Hamams in town. He told me that the last time he went to one was years ago, and only for ten minutes or so. According to him, Kabul doesn't have any good hamams.

However, I did make it to this week's hash. And because Alexandra and Martine couldn't make it to the hamam, they did make it to the run. Also, Giovanni, my housemate, joined me.
The small crowd joined up at the hotel Intercontinental, the same one mentioned in 'The Bookseller of Kabul'. Of course, the ladies were late, the fun part being Alexandra showing up in a long dress, high heels and with hand bag, easily the best dressed hasher I've seen in a very long time. Kabul is currently covered in snow and with the temperature hovering around freezing, there's a lot of slush on the streets. This didn't bother the hare, meaning Alexandra had quite a challenge. Giovanni, Martine and I had a great time on the nearly 90 minute walk

The circle was raunchy, but also long and a bit too slow. Giovanni thought it a bit crazy, Martine couldn't stand it, but Alexandra appreciated the jokes.
Martine left half way but Giovanni and Alexandra might just be back next week.

Looking out over the city from the top of the hill on which the hotel Intercontinental is located, Kabul looks like a real city, with a decent city plan, all sorts of houses and offices and even some parks.
Down on the ground, driving or walking through the city's streets, nothing of this image remains.

It's still cold in Kabul, but the weather's improving. I still can see my breath in the house, but I no longer need to wear three sweaters to feel warm.