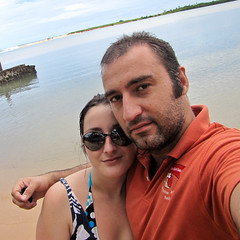 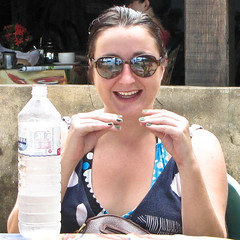 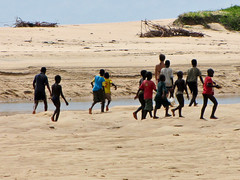 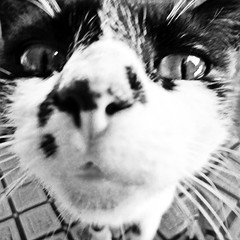 Beauty and the beach 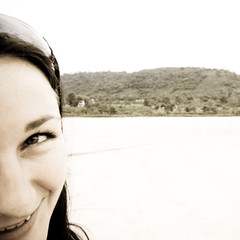 Smile, you're on camera 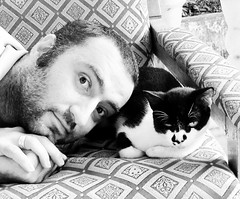 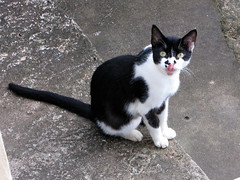 Poking her tongue at me 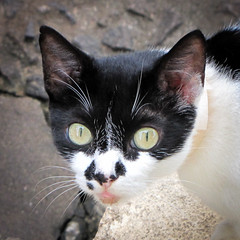 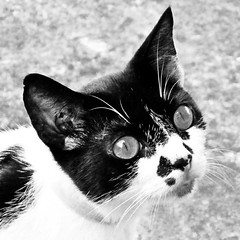 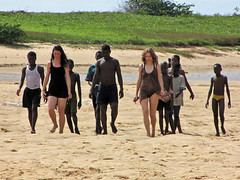 Florence’s is one of the better places to spend your time at in Sierra Leone. Though not even 15 kilometers away from Freetown, the roads down to Sussex beach are so bad it takes an hour to get there. If you’re lucky. Once upon a time, the coast road was tarred and, in places, remnants still exist, though these are now more annoying than helpful.
Florence lends her name to both a restaurant and a hotel, her Italian husband Franco lends his name to the diving school and is the inspiration for what rolls out of the kitchen. Started in 1992, the place was raided (only?) twice during the war and seems to be doing well enough, though what the place reminded me off was a better kept version of the Bagamoyo Beach Resort north of Dar es Salaam.

The rooms, in a building which literally has its foundations in the sea, are large and have, not a given in this country, rather good mattresses, a good shower and 24 hour electricity. The food is good and excellent value for money and includes pastas that taste like they were made in Italy (minus the time it would take to transport them here), fish carpaccio, lobster and much more.
The fish carpaccio was delightful and came from a fish so big, we saw one of the cooks prepare a portion through an open kitchen window, it looked fake. Perhaps 80cm long and 40cm high, but not even 10cm wide.

On the property, cute puppies were frolicking all over the place, while a bunch of cats only seemed to be annoyed with the presence of all these humans.

Related:  I’m not seeing much of a mountain

All in all, the two days out of town on one of Sierra Leone’s Bounty beaches, drinking decent beer and nibbling good food was an extremely welcome and relaxing break from the bustle and challenges of town.

Recently, sales tax was introduced in Sierra Leone. Much needed, as the government is making very little money. The downside being that not all restaurants include the sales tax in the advertised price. Florence’s doesn’t either. Not that the place is expensive, the NGO peeps from Freetown need to have a reason to get down to the beach, but it’s always an unwelcome surprise to discover your bill is nearly 20% higher as expected.

Some of the resorts south of Freetown have their own private beach. The beach directly in front of the small resort, currently with only half a dozen of rooms, is private, but directly beyond the small beach are, first, a sand bank, followed by a fast flowing stream with, on the other side, a sandbank so big it’s practically an island.
So, it’s tempting to go for a walk, at low tide, or fight the current at high tide, to get to the furthest sandbank and enjoy the sea proper. Then again, if you’re white, or not Franco, immediately after leaving the small private beach, you’ll be followed around by perhaps half a dozen of local kids trying to get something from you. Perhaps only a chat, but possibly some sort of contribution.
The hassle is not exactly annoying, and it’s easy to ignore, but you won’t be left alone. It did mean that Niamh and I refrained from going out to sea a second time on our second day there.

Related:  How to write for the web

In two weeks, we will return for the monthly Sunday hash.

We got a Kitty. Her name is Tash. And she’s got her own mind.

iPad, so I still iz

Zain’s mobile internet in Sierra Leone is so bad, it’s most certainly not worth the frustration if you need it for professional reasons. The connection quality is so bad and unreliable, you feel you only end up with the appearance of having a connection.
Comium’s mobile internet is said to be better, but requires a 200USD modem. Niamh’s NGO, Goal, has one, but it’s not the most recent model and perhaps the software is outdated, as I haven’t been able to get it to work on four different computers with three different operating systems.

So, I cut up my Zain sim card to have it fit my iPad. I suddenly can share the scores I achieve on games, check Twitter and whatnot and occasionally request a web page. The iPad being an entertainment device, in stead of a professional tool, the internet connection is suddenly much less crucial, resulting in less frustration with it.

Now I only need to find a way to work.