On the edge of Rano Kao 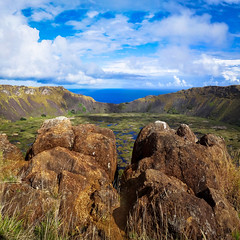 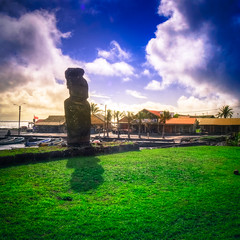 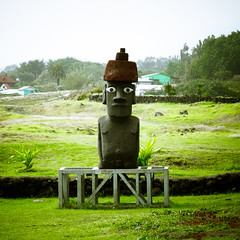 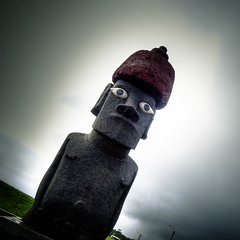 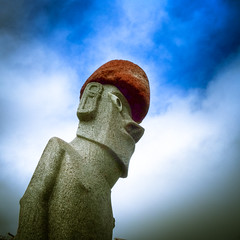 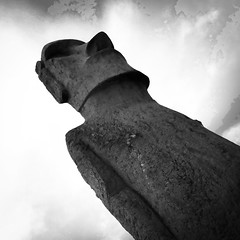 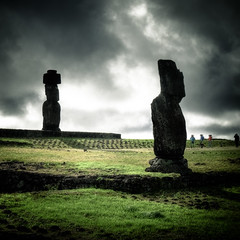 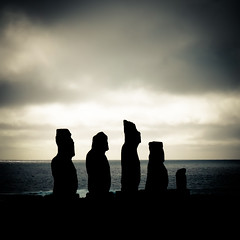 Uncovered by a Dutch admiral in 1722, the general consensus has been that was only years after the island’s population effectively self destructed due to overpopulation, but more on that later. Easter island has had to deal with a lot of shit, including at some point only 100 indigenous inhabitants surviving, in part due to slave raids from the mainland of Latin America, until in 1960, Chile finally granted the inhabitants freedom to move back and forth between the island and the continent. Now, there are some 5000 inhabitants, only outnumbering the moai, the stone heads, by about 5 to 1.

In the complete middle of nowhere, some 4000 kilometers away from both Chile and Tahiti, it’s now pretty much an established fact that the island was populated from the west, from Polynesia, Thor Heyerdahl only recently being proven wrong after his 1947 journey from the South American coast to Polynesia. That said, though Heyerdahl was a bit too adamant about the Pacific islands having been settled from the east, recent DNA-based evidence leaves the possibility open for at least contact between Polynesia, Easter Island specifically, and Latin America.

There’s a lot of controversy about the history of Easter Island, some scholars and oral tradition suggesting that the island wasn’t populated by chance by a few fishermen drifting off course, but by a small armada of peoples leaving one of the many islands in Polynesia, fleeing their supposedly sinking homeland, perhaps even knowing exactly where they had to go.
Arriving in a comparative paradise, the settlers thrived for hundreds of years, initial arrival happening between 300CE and 1200CE, until perhaps the population became too big to be sustainable, and civilization imploded, seemingly almost from one day to another, with dozens of moai left unfinished in the volcanic rocks in one of the corners of the island.
Possibly coming from the Marquesas, an impressive 3700 kilometers away, I would surmise it’s not impossible that some islanders made another journey to the coast of Chile, about the same distance away, allowing for contact between the island and mainland. The islanders certainly dreamt of leaving, developing a religion, the bird-man cult, for those able to go wherever they liked.

In addition to the dreams of flight, the bird-man cult also might have been a consequence of their reverence of tune. Tuna was not only considered special for its sustenance, the tuna would also chase down small fish and push their shoals to the surface. As a result, birds would scoop down to eat the masses of fish off the surface, hence, the arrival of said birds marked the arrival of tuna.
However, with no access to trees for making seaworthy fishing vessels, the islanders could see the birds, know of the tuna, but would be unable to get at them.

Recently, Terry Hunt and Carl Lipo presented their own findings and theories on the history of Easter Island and they make a strong claim for quite an alternate take on the island’s past. Carbon dating seems to suggest a settlement of the island as recent as the 13th century, with the island’s population imploding only after the arrival of the first Europeans (and their diseases).
Additionally, through the realization of the unfinished moai having an angled base, and the finished moai having a flat base, they allowed for the possibility of the statues not being transported on their backs, being pulled across the island, but being ‘walked’ across, basically pulling the statues from side to side and their being off-balance constantly slightly having them fall from side to side.

Now, the island makes it money from tourism. 80000 tourists show up every year and the few dozen hotels and restaurants cater mainly to these temporary visitors. Chile, already not very cheap, is paradise for the markup suffered on the island, virtually everything having to come from afar.
Similar to flying into one of the more struggling African countries, those living on Easter Islands take truckloads of goods back to Easter Island with them from the mainland.
My ticket allowed for two checked-in bags at 23 kilos each. I only had one, stuffed with some basic groceries. I suspect it could be a viable business to have tourists who only bring one bag, bring a second for inhabitants of the island, for a certain fee, stuffed with plain groceries.

The island’s geography resembles that of Wales or Ireland. Most of it is softly rolling hills, but hiding volcanic rocks (or is that what’s Ireland and Wales hide under their grassy hills as well?) and sporting two craters. The weather during my visit was also very British, that is, rain almost every day, though reasonably warm.