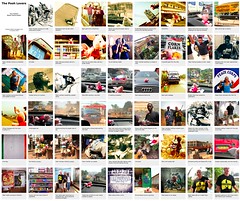 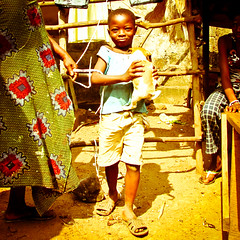 It holds the puppy 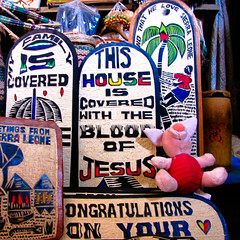 GOAL decided to go ahead, just before christmas, with a complete overhaul of their DCYP, Disadvantaged Children and Youth Program. The paper based workflow is to be completely moved online. And I’m supposed to have this finished when? Before the end of January of course.

Then, the National Auditer’s Office of Tanzania also needs a new website. Why not. When do they want to be finished? Well, not later than February, of course.

SACSIS is wrapping up moving to a new server, with a completely overhauled content management system. This week.

And culture, too! The Irish pub O’Casey is now having rather superb open mic and live music nights on Wednesdays. Thursday, they are still home to quiznights. On Friday I had my exhibition Once Salone, and on Saturday there was a photo scavenger hunt organized by a few friends.
With mediocre internet at home, it’s almost like being in a real city!

Well, if it weren’t for having had electricity for only two days since the start of the new year. But water on most.

The exhibition was a success. Most works were sold before the opening of the show. But I had to also cut the show short. I wasn’t able to get the prints framed, as there doesn’t seem to be a framer in town, and was too worried about the prints getting damaged.

The scavenger hunt was fun. Tom and I, the only team of two, where everyone else had four-man teams, came in second. It was my first scavenger hunt. Nice, but not as much fun as a photomarathon. For one, in a scavenger hunt, the quality of the photos doesn’t matter. Also, the winning team split up to check more items off their list. Of course totally allowed and possible, but it also means that, in effect, they were two teams pooling their scores. Wouldn’t it be more fun to keep the whole team together at all times?
One way to resolve this would be to only allow submissions from one camera, I suppose.

Related:  A trip to Cambodia

The winning team’s prize was a case of PBR. The pool party afterwards was a killer. The Star on tap ran out early. The braai was well stocked.