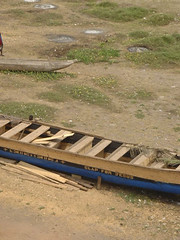 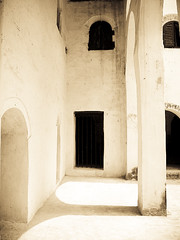 Over at El Mina 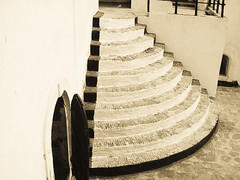 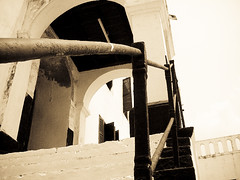 Going up or going down? 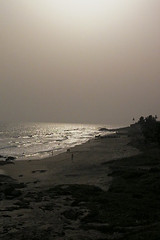 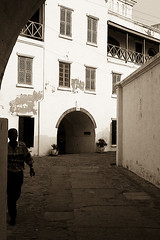 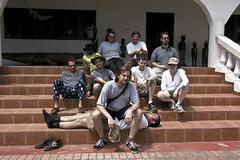 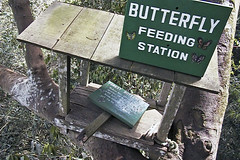 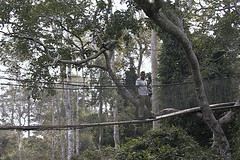 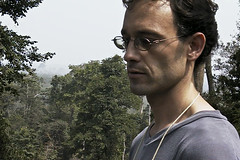 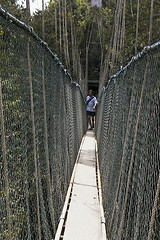 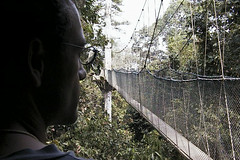 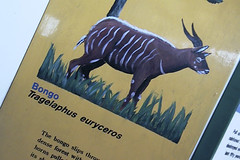 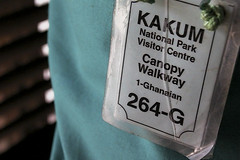 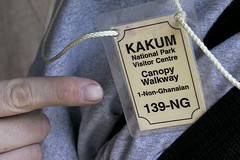 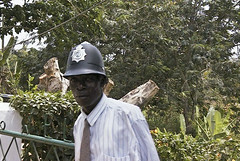 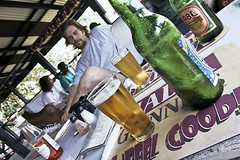 Liquid of the gods 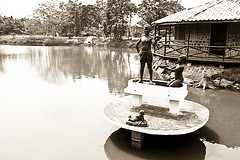 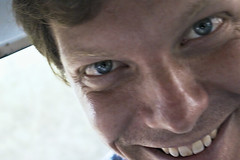 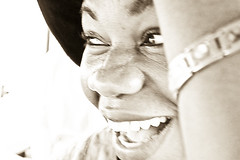 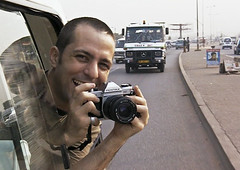 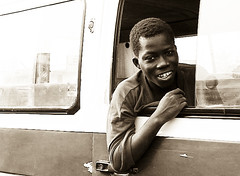 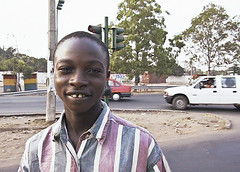 About a boy
World » Ghana » Kakum

During our stay in Ghana, Geekcorps, being Stophe, organizes three trips up country. The first being a trip to Kakum National Park, where they have a canopy walk, suspended bridges hanging from treetops and one of only three in the world. The park is very close to both El Mina castle, one of the very first colonial forts in Ghana held by the Portuguese, the Dutch and the Danes and Cape Coast, also the location of a famous fort.

Our next trip, which would bring us to Mole National Park, way in the North of Ghana, would take us one a trip of more then 12 hours, each way. This one, to Kakum, was going to be a short one. Only four hours in a run down tro-tro. Basically a minican in which, in the western world, a maximum of nine people are allowed. Here, the minimum is 15.
Walk

The whole canopy walk thing sounds much more spectacular than it actually is. Although the bridges are between 15 and 40meters up in the air, the forest is much less dense as what you would expect with a tropical rain forest. Not only can you see the floor of the forest along the whole trip, you can also see for miles and miles, making it a rather awkward tropical rain forest. For the girls it was more of an experience than for the boys. Jean, a geek, and Gladys, the Geekcorps secretary both had something of a difficult time trying to navigate the swaying bridges. As for the men, even Tomas, suffering from a mild form of fear of heights had no problem whatsoever to navigate through the woods and come back home again.

Probably the most intriguing of the whole park was the fact that it was initiated by a Canadian, with minor help of some Ghanaians. This, however, is very typical of anything that actually is 'working' in Ghana. It is foreigners that achieve success in this country.

That situation is very similar to what I experience at JoyFM and also resembles what I hear from other Geeks. The 'frame of mind' of Ghanaians does not seem to match that what is necessary to be successful according to western standards. That, in itself, is not a problem. However, if people or more specific, companies actually try to measure up to western standards, they would have no choice but to play according to the same rules. They don't seem to be able to do such a thing.

Not that people are stupid. My shadow partner, Chico, has got a good feeling for graphical design. For one, he has created two proposals for the design of two different sites that, according to JoyFM management should be up and running in a matter of days. One should cover everything related to the government, one should be an entertainment site. The entertainment site would be at the same level as Launch.com, that is, based on what Chico put forward for graphical design. However, in no way is there any consultation with anyone who would know what. Technically, these suggestions would entail. In addition, there is no eye, whatsoever, for detail, The ideas are there, but there is no one working them out.

Related:  One year on

Besides Kakum, we also visited Cape Coast and El Mina. Two castles built during colonial times. From El Mina, many slaves were deported to the new worlds of North- and South America and the experience of walking through the place is kind of unsettling although interesting.