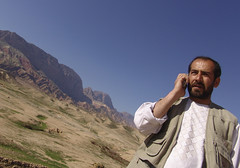 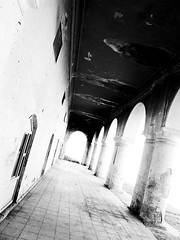 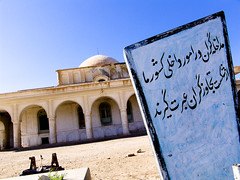 Afghanistan has quite a history and driving back from Mazar, now knowing it should only take us some eight hours, we decided to take in some of this history.
First, we stopped at an old palace of king Najibullah, overlooking the oasis town of Tashkurgan and later we struggled a bit to find the nearly 2000 year old site of the Surkh Kotal kings who followed the Bactrian rulers which were descendants of the people left by Alexander the Great on his conquests of the region.
The site itself has nothing much left to offer, besides a fantastic view of the surrounding countryside. On our way to the top of the hill on which the site is located, we passed some 10 kids, herding goats or playing games. By the time we got to the top, some 20 kids had followed us up, all having to shake our hands and ask us what we were doing there.
Walking around, the group was joined by what looked like a 15 year old, a machine gun carelessly slipped over his shoulder. Azif found pleasure in telling everyone what we were doing before the friendly gun-toting youth invited us for tea, the 20 kids still forming a buzzing cloud around us. I politely declined, struggling to be friendly but resolute at the same time, in Farsi.

Then there was the Salang tunnel again. Before getting in, we were stuck for no less then five hours for reasons that never became clear. Hoping to get back by four, we arrived after eight. Tired, but very, very satisfied.
What struck us was the, clearly foreign, cyclist, just entering the Salang tunnel as we exited. The sad bastard.

Related:  Checking up on the Knights Templar
This text is available under a cc-nc-a license.