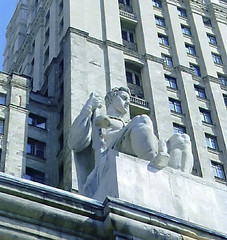 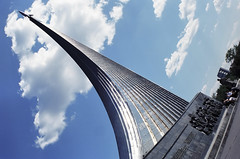 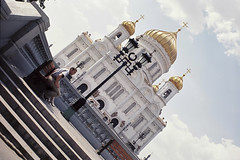 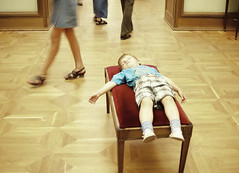 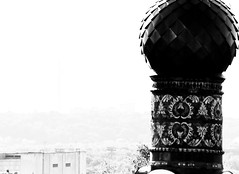 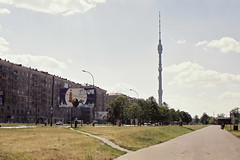 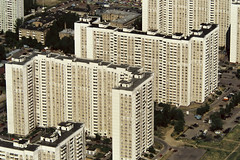 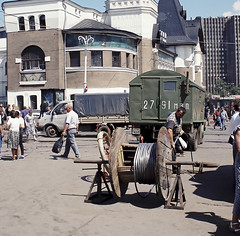 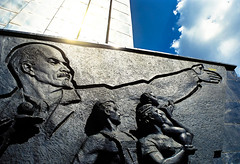 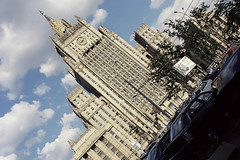 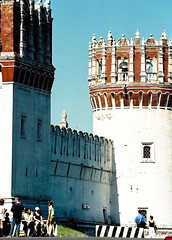 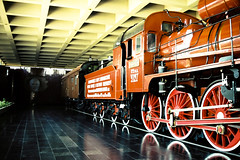 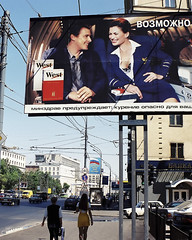 What IS she doing? 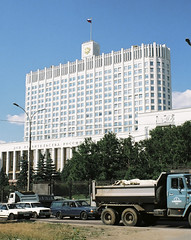 The White House in Moscow 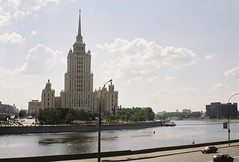 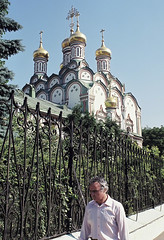 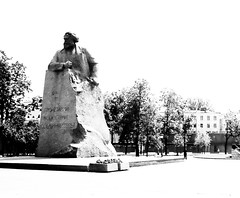 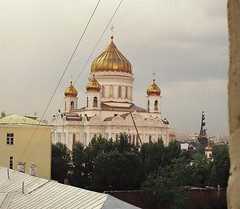 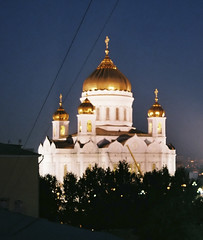 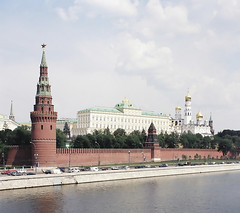 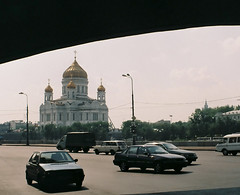 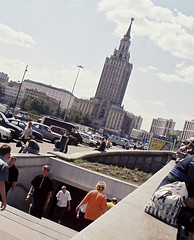 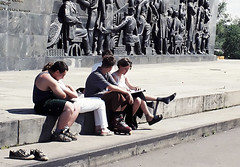 I went to Gorky park today. The movie impressed me quite a lot in the beginning of the 80s and I just had to go there. What an uninteresting place that is! The park is just one big collection of weed. You have to pay to get in, and all there is in there is one small pond and some dated fairground attractions. I felt like puking all over the place.

Next was the Novodevichy Convent. It was closed. But the cemetery was open. Not really impressive, although the place houses the bodies of some very famous Russians. Not close buy but a bit more impressive was the train that shipped the body of Lenin back to Moscow in the 30s. The train is stored in-doors and the building itself used to be fully air-conditioned. Now, it was even hotter inside than it was outside. And it was already pretty hot outside. I wonder why they wanted to put it inside.

The Ostankino Moscow TV tower was also quite interesting. At 540 meters it's quite an impressive structure, rising high above the surface. Close to the tower are a statue of Yuri Gagarin and a memorial commemorating Soviet space flight in general. When coming back from the TV tower I took a bus to the nearest metro station.

You are supposed to buy your bus tickets with the driver. So I tried to get my ticket from her. For some reason, she hadn't any, or at least wasn't willing to sell any to me. I tried for a few stops but gave up as my stop came up. Of course, just then, 6 conductors came in, asking for everyone's tickets. I had none and started a discussion with one of the conductors, making it clear that I had wanted to get a ticket but wasn't allowed one. He made it clear that my bus driver didn't have tickets. I asked him where I should have gotten tickets then. He said: "From bus driver." When I pointed out that I had tried, he said: "No, no, from different bus driver." I paid my $0.50 fine and left.

Related:  The only Europe in Africa

Coming home, again a very nice meal was waiting for me. A girl called Chris, also Belgian, turned up minutes after me coming home. She had stayed at Mark's place sometime earlier, when studying in Moscow and she now traveled to Moscow regularly on business and occasionally stopped by. All four of us, Mark, Anya, Chris and me went to the Dutch bar I had visited on my first day in Moscow. It was 'Holland night' and the owner had actually obtained a barrel of Dutch herring and jenever; Quite funny. We ordered some drinks and snacks and afterwards, Chris and me decided to go out for another beer someplace else. Mark and his wife went back home. It was about 11.30pm. Not really a time for me to be in bed. Luckily, I had convinced Chris into joining me, although she still had to work the next day.

We decided to walk towards the Kremlin and see where we would end up. Clearly being tourists, a drunken, but fine-looking, Russian asked us for something (in Russian). I made it clear that we didn't speak any Russian, but Chris did, and replied, in Russian. This got him hooked and for some time, he kept walking along with us, saying that today was his birthday, that he wanted money, cigarettes, a lighter and more. When I made it clear we had no intention to give him anything (although Chris was about to consider giving some cash) he started to get mad. Shouting, throwing his (broken) lighter against a wall, kicking against stuff lying on the ground, etc. I decided that giving him a cigarette might pay off. It didn't immediately, but it kept him busy.
We quickly moved away.

Coming on to Red Square, actually only meters away from the place I had had the remarkable experience only a day before, talking with each other in Dutch, we where approached by a police officer who stopped us in our tracks. He wanted to see our papers. Now, when entering Russia, it is required you get a stamp in your visa. Second, when being in any Russian city for longer than 5 days, you need to register your visa in that city too. Only recently had that period been extended from 3 to 5 days. Anyhow, I hadn't registered my visa in Moscow and what's more, since I had crossed the border between Belorus and Russia, and since there is almost no control there, I only had a stamp from Belorus in my visa. A stamp that I received when crossing the Belorus-Poland border. Chris, as it turned out, had no visa nor passport with her at all…

When staying in a more up market hotel, the hotel generally takes care of registering your visa. Chris got out by saying the hotel still had possession of her stuff. She's a nice looking girl, so probably that helped too. Since I don't have a pretty face, at least not for most men, I was in bigger trouble. The officer insisted that I had to have my visa registered, and wasn't swayed by my suggestion that I would register it the very next day. Chris, speaking fluent Russian because of having studied the language, first interpreted between the officer and me, but slowly started to speak for me to the officer. The result being that I, after some minutes had no idea what they where talking about.

What had happened was that the officer wanted my visa to be registered right away. Although legally there was nothing wrong with my visa; it was stamped in Belorus, and I still had time to register it within 5 days. But try convincing a Russian police officer at close to midnight in Moscow. I had to come to the police station and register.
However, since no registration takes place at night, I had to wait till the next morning. And in the mean time wait. In a police cell. Chris, feeling that I wouldn't really be interested in having to spend the night in a Russian police cell, asked what exactly needed to happen. "Well," the guy said, "he has to pay a fine and then he can go." Besides the fact that it seemed that the officer had forgotten about the stamps , required in the first place, Chris asked why we couldn't pay the fine now. The officer looked at us with eyes saying "are you stupid, or what?" and said that we had to receive a receipt for paying the fine.

Then, luckily, perhaps in a moment of clarity, Chris mentioned that we really didn't need a receipt. The officer's face light up and Chris asked how much the fine would be. The officer seemed to have fallen in a dreamy state of consciousness, as if to contemplate his next move and then said: "100 Rubles". Chris handed over the money, the guy told us that he would keep an eye out, making sure that we would be safe for the rest of the evening and left. 100 Rubles is about 4 dollars…

We still had to go out for a beer and so we did. In a western style pizza parlor we talked about Russia, studying Slavic languages, Eastern Europe, sex with animals, and other mildly interesting subjects. She told me that Mark used to beat up his wife and that she herself had left the house on not very friendly terms with Mark, but that she came back occasionally to visit Anya, someone she could get along with very well. We split and agreed to go get a beer after my coming back to La Bruxelles (that's Brussels, if you're wandering).