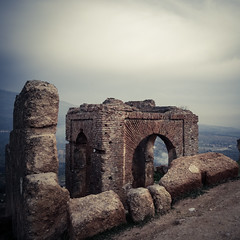 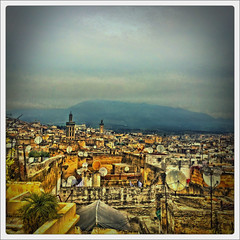 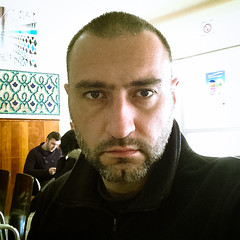 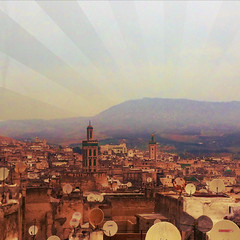 Fez doesn't get the stellar reception Marrakech does, but the one big advantage Fez has over Marrakech is that while Marrakech's medina is almost completely targeted to tourists, Fez is a real working city. Yes, you still have to deal with the occasional tout, and some restaurants live almost only on tourism, but these are the exception. Most everyone else just goes about their own business.
Fez is often said to be the best-preserved old town in the Arab world. And it's big. In fact, it's he largest car-free urban zone in the world.

And, the old town might indeed be the best place in the world to see a funky old medina in all its splendour. It's amazing the little shops have survived for so long, in the face of western-style pervasive shopping empires. Of course, there's a certain charm to the little stores, not just for tourists, but the same applied to the many little butchers and greengrocers all around suburban Europe that were replaced in the 1990s by ever bigger supermarkets and malls.
But, modernity is creeping in, here, too. Between the new and old towns, there's a Carrefour hypermarket and your usual plethora of American fast food chains. I don't remember the mall being there four years ago.
Still, as long as it lasts, you can find plenty of tiny cafes, both in the new and old town, and watch the world go by. You can enjoy life, as it is. Well, mostly.
My hostel was one of the higher buildings in the old town. From its roof, overlooking the city in the faded light of a mist covered sun, the connected jumble of houses showed itself to be the perfect playground for scores of kittens.

The best parts of town, still, are those that see the fewest tourists. At the city's bus station, the bustle is energetic. A huge variety of foods is on sale, men hang around, seemingly their only purpose being to sniff tobacco resting between a thumb and forefinger.
Kittens roam the departure hall. If you sit down for a snack or a drink, you might get one jumping on your lap.

When traveling by ferry from Algeciras, in Spain, to Tanger Med, Moroccan immigration is handled on the boat. It was a quiet ride, so only a few dozen passengers lined up.
When it was my turn, I was asked for my origins.
"today?"
"No, no."
"This trip?"
"No, no. Your origin!"
"Iran?"

It wasn't clear why this was relevant, but of the dozen or so who went before me and whose process I had been able to observe, I was the first one of whom fingerprints were taken.

Then, when entering Ceuta from Morocco, the queue was packed and long.
When it was my turn, three of the civil servants behind the immigration desk went into an extensive debate, which clearly was about what they were supposed to do with me. In the end, I was told to come around the side. I had to follow one of them to another office, a few hundred meters away.

The other office turned out to be the border control for entering Morocco. I asked what the problem was.
"We are only doing our job. We are border control."
Someone was called in from nearby, unlocked a cupboard, took out a computer and fingerprint scanning gear, and went ahead and scanned my fingerprints.

Then, when they were happy with their findings, one of them wrote something on the back of my little immigration declaration paper and told me to go back to the first office to get my stamp. There, I was motioned into the office.
While I was waiting, I could see the information these guys had of me, on file. The computer screen listed my passport as German. As German. These people were following up on some unspoken threat, afraid that some Iranian on a European passport might be illegally trying to get into Europe, or whatever, and not one of them noticed that the information they had taken down themselves , on me, was wrong.