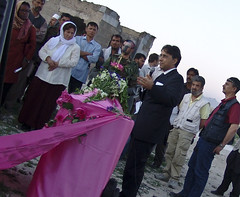 A vigil for Clementina Cantoni 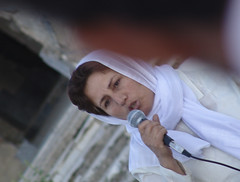 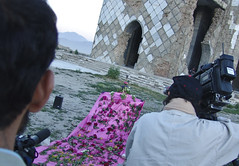 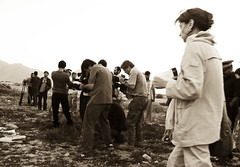 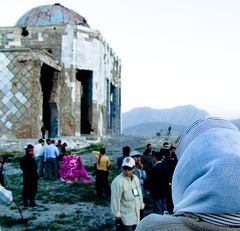 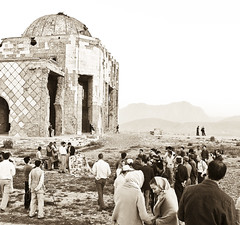 Every NGO in Afghanistan tells you to avoid groups of expats in public. They represent targets for 'terrorists'.
So today, a whole bunch of them collected on top of Nader Shah tepe, where the tomb of the Afghan royal family can be found. Some 40 participants, and as least as many press and security plus some 20 police held a vigil for Clementina Cantoni, the Italian lady who was kidnapped three weeks ago.

She was taken after returning from yoga classes. Something I've attended a number of times but probably refrain from doing now. Not because of the kidnap, but because they moved the time forward to 5pm. Difficult timing. Why did they move it forward in the first place?

Giovanni, who knows the lady personally, me only having said 'hi' once or twice at yoga, is rather pissed at the way DACAAR is handling the situation in particular, and many NGOs in general, are handling it: acting as if nothing happened.
Quite occasionally, aid workers get killed in this country, but almost never is more than only fleeting attention given to these incidents. This week, it was exactly a year ago that five MSF employees were killed. No commemoration, nothing. The only lasting memory being that MSF pulled out of Afghanistan completely.
CARE, the organization the kidnapped lady works for, organizes something every day, if only a press statement. DACAAR, and every other NGO in Afghanistan, should have at least issued a statement after her kidnap, at the minimum condemning the act. In stead, DACAAR expat staff were told that the kidnappers don't have a hotel for hostages, so now that they have one, it's unlikely they'll kidnap more people.

Arriving at my new house here in Kabul, I almost immediately realized we had to start a book exchange, the Kabul Book Exchange Network. There are between 100 and 200 books in the house which don't belong to anyone in particular. There's a huge shortage of foreign books in Afghanistan and since many expats are not allowed to do anything but go from home to work and back, particularly now, there's an even larger demand of books in the city.
I decided I wanted to combine this book exchange with links to Amazon pages, so that not only can visitors buy the books from Amazon, they would also be able to get a shitload of extra information on them. What's more, I also wanted to tie the site in with Bookcrossing, so that every book could also be tracked easily, allowing for users to exchange their books without the Kabul Book Exchange being a necessary part in that. 'Give a book, get a book'.
Then, yesterday, one of the first emails I got at work was a request for donation of… books, for the to-be-established Kabul Book Exchange.
I'm tempted to say 'Great minds think alike', but I don't know the person planning on setting up this other book exchange.