The train station in Videle 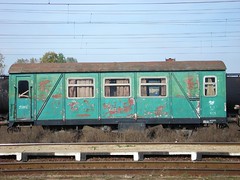 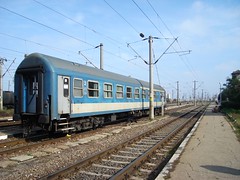 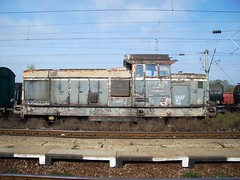 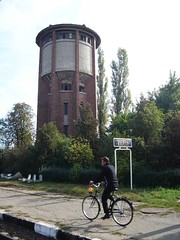 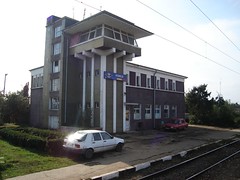 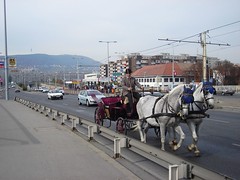 I tried getting a plane ticket from Budapest to Istanbul, but prices were too high. And anyway, travelling overland also has a poetic ring to it. When boarding, the conductor showed his surprise at someone actually showing up on the train. He made it clear it would be a long ride, that we would arrive the day after tomorrow, I hope.
Many seem to share the conductor’s sentiment, as there will be only two passengers in the carriage, the only one going to journey from Budapest to Istanbul. Other parts of the train only go to the border, two carriages continue to Greece. That’s the Trans-Balkan-Express.
The train -can- only be operated at a loss. I expect this remnant of Soviet hegemony will disappear in the next few years.

Some years ago, when travelling by train from Poland to Russia, every station was filled with hawkers selling anything from boiled eggs to fried bread. Here, no one appears to be interested in selling anything. The signs at the Romanian train stations are brand new. Next year, this, too, will most likely be European Union.

In Videle, Romania, we had to wait for quite a while, when I realized how funny, in an annoying way, it would be if the one carriage I’m staying in would be left, forgotten, in the middle of this country, with only stray dogs to keep me company. Then I looked out the window and saw my carriage was the only one left at the train station.
We stood still for four hours.

Istanbul is like a woman’s private parts: moist and warm. Sweating like a dog, I struggled to the hostel I booked online, to find it’s the exact same one we stayed at three years before. I chose this one because it offers wi-fi access in the lobby. Upon arriving, I mentioned this to the guy at reception. “Of course we have wi-fi”. Most hostels now offer wi-fi access. I’m getting old. Proof is also the many hostel dwellers whom I consider too young to even start picking their own noses.

Related:  Christmas in July
This text is available under a cc-nc-a license.