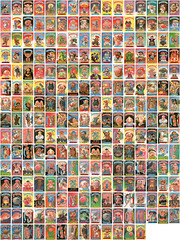 As a kid, like many, I collected several sets of trading cards. Three complete sets of those I recently chugged out, but not after digitizing them.

This set, collected in the late 80s, is interesting for it includes a relatively hard to get first series in Dutch.

Back in the early 80s, when I watched the Fun Factory sometimes two mornings long during the weekend, my favorite show was, beyond a doubt, Inspector Gadget. This was on Sky Channel, so not on the Dutch national television.
Nevertheless, somehow these Inspector Gadget trading cards were available in Holland, but I forget how. As proper trading cards? With chewing gum?

For some reason, the cards were distributed with French signage. Sure, the creation of Inspector Gadget was a cooperation between broadcasters from six countries, including France and Canada, but for a kid, used to the English names, to be confronted with Sophie instead of Penny and Finot instead of Brain must have been a bit disorienting.

Originally hailing from Peru, Boris Vallejo moved to the US long ago and has been creating hyper realistic and beautiful art ever since.

The man is still going strong.

The matrix of cards is constructed from a series of trading cards I acquired some 20 years ago.

Vallejo's art is truly stunning, with its art nouveau influences, many of his works resemble post-modern, often futuristic, interpretations of Alphonse Mucha paintings.

I always figured that if Don Lawrence would take his time, Vallejo's work is what Storm would look like.