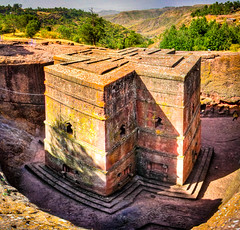 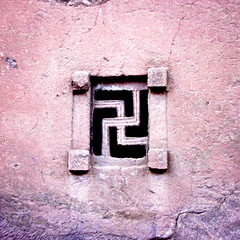 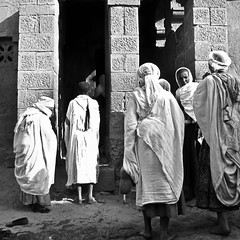 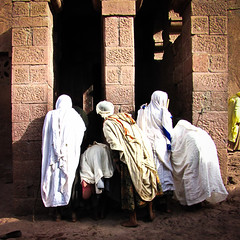 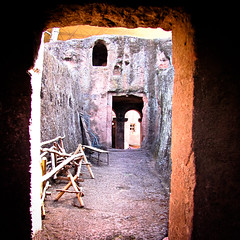 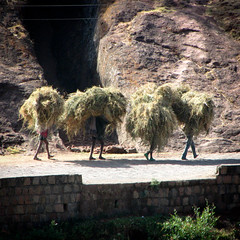 They hay is off for a meander 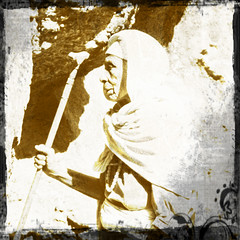 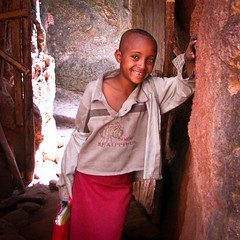 Legend has it that king Lalibela was drugged and, in a coma, was told by god to recreate Jerusalem in his backyard. The wide variety of building styles used in Lalibela's churches seem to suggest a much longer period for construction than just the reign of one man, but scholars do seem to agree on the churches having, roughly, been constructed during Lalibela's reign, in either the 12th or 13th century.
Also, several of the names for the town's landmarks hark back to Jerusalem. The stream flowing through the village of a mere 15000 is the river Jordan, the largest collection of churches have as their focus the 'tomb of Adam', just like Golgotha in Jerusalem is said to contain Adam's grave.

Lalibela's 11 churches are a testament to decay, if anything. In various stages of decompensation, it's reasonably clear that, once upon a time, these churches must indeed have been a reasonable second Jerusalem. Now, faded, crumbling, and, as they must have been when built, out of kilter, filled with ragged and mostly old believers, the churches are indeed still in active use, but by a people who would in no way are able to maintain the former glory, let alone construct something similar from scratch.
Begging for pens, bags or, straightforward, money, even the authorized guards of the churches go out of their way to show you a shortcut, hoping for a 40 eurocent tip. How the mighty have fallen.

The church of St. George, shaped like a Greek cross and one of the few churches not covered by a roof by order of UNESCO, is still quite impressive, if still off kilter.

Related:  Lion and cheetah park
This text is available under a cc-nc-a license.