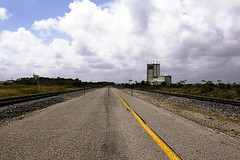 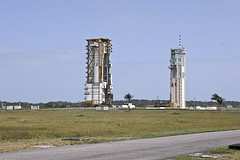 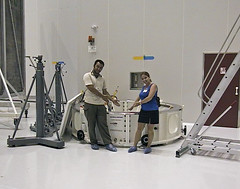 Lords of the ring 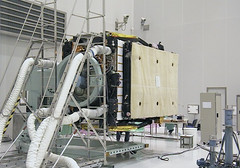 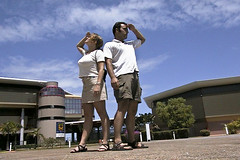 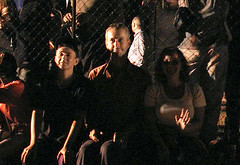 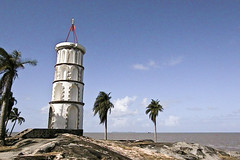 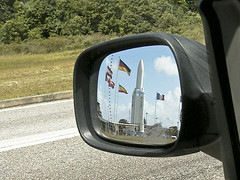 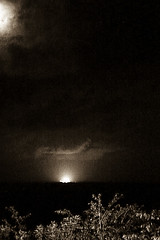 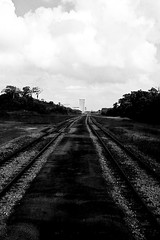 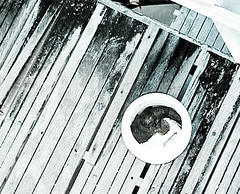 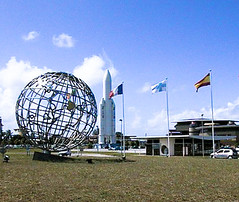 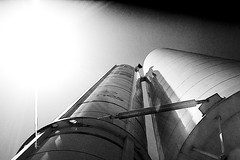 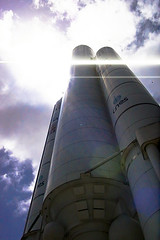 A visit to the Kourou space center is only worth it if you're able to enter the grounds. Every day, there are free tours taking you to the most interesting sites, after visiting the 'Salle Jupiter', the control room from where launches are coordinated. The whole launch area is larger than Paris and the buildings and platforms are very impressive.
The museum, which isn't free, is less interesting, having more resemblance to an empty warehouse then anything else. The only reason why you might be interested in entering is the unlimited internet access that's on offer. Using French keyboards.

Because of the upcoming launch, most of the tours were cancelled, but we still managed to get onto the only (fully booked!) one that was still scheduled during our stay. Still, we didn't get to do the complete tour since the Ariane 4 rocket was still waiting for its launch and access to the nearby area was strictly forbidden.
In fact, as from three days prior to every launch, all access routes are blocked by military and police. We had tried to get onto the grounds from various directions with our own car but weren't successful.

The launch was going to happen at night since some of the equipment on board needed to be calibrated using the rising morning sun. The night before the launch, we met a German guy who worked at the site who invited us for a private tour of the facilities. French Guyana was expensive, but this, together with the launch, made it all worth it.
We first met Toni at the Kourou sports bar and later bumped into him again at a Brazilian restaurant. I invited him to join us for a drink and, from the moment he sat down, he couldn't stop talking about ESA, the international satellite market, technical aspects of a launch and the fact that America had admitted to also blocking a European GPS system in times of war.
Toni drove us all over the launch area the day after the launch and we had the best of times. On the tour, we also stopped by a hangar were a group of people from India were working on a satellite that was to be part of the next Ariane 5 launch. Men and women in traditional Indian dress were intensively watching multiple monitors with dials, graphs, pointers and data outputs. In the background, a standalone machine running WinAmp was pumping out perfect Hindi-pop. It really kicked a lama's ass.

Already in St. Laurent we were told we could forget finding a place to stay in Kourou. Kourou has two hotels on the beach and two at the edge of the city. All were booked. Amazing at prices ranging from 60 to 200 euros. I suspected them of occasionally postponing a launch to boost the local economy.
The nearest hotel outside Kourou is on the edge of Sinnamery, a lovely and quiet little town on the banks of the river with the same name. The receptionist of one of the hotels we stopped at in Kourou was so kind as to check if they had any rooms available in Sinnamery, but alas.
After asking multiple times if there really wasn't another hotel in town, it turned out there actually was one. "But you REALLY don't want to stay there", the receptionist said. I asked why, but he evaded the question, "It's not very clean…. service… you won't like it….", but we didn't really have a choice. The hotel turned out to be only marginally cheaper, but almost empty. Sure, it wasn't as well kept as the other hotels but it was clean if slightly run down.

Before the launch, walking towards the hill, after parking our car in the neighborhood, a small van drove past us and stopped some 50 meters in front of us. "Betsy…? Baba….?" It turned out to be Aly and Mike, whom we had met down at Brownsberg in central Suriname. Luckily we both had brought a large bottle of rum to liven up the night.

Related:  It. Is. Momentous.

The launch, which we watched from a hill on the edge of town, was fantastic. It isn't possible to get any closer to the launch site without the correct access cards. Although directly around the Salle Jupiter, a cinema like room has been constructed for which it's possible to make reservations, all reservations were already handed out weeks in advance since this was going to be the last Ariane 4 launch.
On the hill, a large video screen had been put up so that we could not only see the launch with our own eyes, we also could follow the broadcast around the launch on the TV-channel created specifically for activities surrounding the spaceport.
With the countdown in the background, we could see the rocket taking off and, several seconds later, we not only heard but also felt the blast off. We had a clear sky, so we could see the rocket making an arc over our heads, heading for the eastern sky, releasing burnt up rockets and igniting new ones. Although the whole flight only takes a brief 20 minutes, we were able to see the satellite until we finally left the mountain, some 90 minutes after launch.

Besides the spaceport, there's another big attraction in Kourou; devil's island, the place were Papillon was imprisoned and escaped from. The tour will set you back an uncool 35 euros, which will drop you off on the island in the morning and pick you up near the end of day. Since there's nothing on the island itself besides some ruins, you have to bring your own food and drinks.
Additionally, during the launch window, all tours were canceled. During a launch, everyone residing on the French Guyana islands is evacuated.

Related:  Volgograd is the home of mother Russia
This text is available under a cc-nc-a license.