Looking towards Sultanahmet from Beyoglu 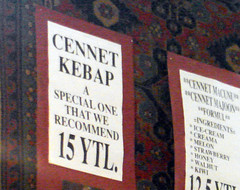 A special one that we recommend 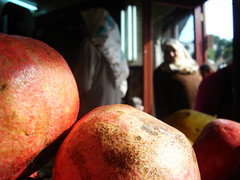 And that, my friends, is the added value of McDonald's right there. Actually, the burger wasn't all too hot and spicy, but there certainly was a peppery taste and a slightly different and surprising sauce. And it -was- bleeding hot.

After running around Istanbul yesterday, it was drinks again at the hostel at the end of the day. The Bahaus, although the rooms are not all too great, has a very enjoyable, homely atmosphere. With a bar and rooftop restaurant that certainly could use a good spring cleaning, or two, but also gives of a mellow and enjoyable feeling which rubs off very well on the guests. In fact, on both nights, several people who were staying at other hostels had drinks at the Bahaus, including Brian, the surfer dude whom I shared the train from Budapest to Istanbul with.

Yesterday, after a rather short previous night and another evening of drinking and chatting the night away, the whole group, some 10 people, decided to head off to town. It was the end of Ramadan and although I expected most people to celebrate at home with the family, the city was packed, even at 1:30am, when we finally headed to town.
Going with two cabs, three of the four guys in our cab were in the process of paying the driver after getting out, when the fourth guy disappeared. Then we noticed we had lost the guys from the first cab. The three of us, an Italian from Milano, aspiring actor Ed and myself, ended up walking around aimlessly, before grabbing a bite and discovering a local pub where a folk singer was churning out all time classics, judging from the raving clientè¬¥.
Moving on, we bumped into the rest of the group, just returning from the club we were looking for. Them going for a bite to eat, we went into the, now empty, club. One beer, meeting two Turks in the club whom Ed had met the previous night. Then leaving the club, finding the rest of the group to have disappeared, we headed for the only place the Turks still new to be open.
Although the floor of the apartment sized club was littered with rubbish, they quickly brushed the dirt away and the DJ went wild with Turkish Europop songs, while we downed several free shooters before ordering a beer. Then we noticed it was a gay bar. Most specifically Ed, who's a bit like a young version of Hugh Grant, had a hard time making a slow gettaway.

Bleeding headache in the morning after three hours of sleep, in search for a bus ticket to Goreme in the heart of Cappadocia. Sold out or not available, until the fifth travel agency, where I ended up getting a ticket on a service where some 80% of the seats still turned out to be empty. Eurolines could learn something here. The leg room is very reasonable and there's a steward handing out drinks and snacks.

During the day, with Ed and Brian, rejuvenating in a hamam and then recovering from the hamam over tea and baklava.

In the pickup taxi from Sultanahmet, the area close to the Blue mosque where all backpackers and their friends seem to stay, to the biggest bus station I've ever seen, I saw a 4×4 standing still, with a weeping dog caught underneath one of the rear wheels.

A few years ago, Turkey lost nearly all its millionaires when six zeroes were scrapped from the currency with every Turkish lira now worth about half an euro. Maybe through a related exercise, but strange in any case, practically all prices are extremely rounded, even the cheaper things.
For example, tea is 0.5, 1, 1.5, 2 or 2.5 lira, but never, say, 1.60 or 1.95. A donner is 2, 3 or 4 lira. Never 2.70 or 2.95. Are people not interested in paying a competitive price? Doesn't a pricing system like this easily allow for competition, good business opportunities?