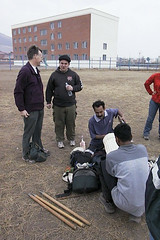 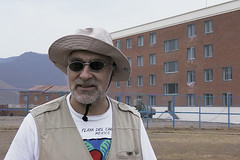 I’ve been planning on doing some sports here since the day I arrived. I normally work out (fitness or, as some people have it, body building) two-three times a week and I do some squash on the weekend, not to mention the physical activities I undertake together with my girlfriend, Betsy. So going from an action packed life to a seven-nights-a-week-vodka-binge-lifestyle tends to influence my physical state of being.
Last week, I visited the fitness at ‘star apartments’, a secluded area where mostly Americans, working at the American embassy live. Gaining access to the rather small, but well equipped room, would have cost me 90 dollars per month. Although they do, hurrah, give discounts.
I managed to find a place at the youth center where the machines are of significantly lower quality, as was the price, at 20 dollars per month. The building turned out to be the same one as where Bakir and I later went swimming. Bakir also showed me a fitness place where he supposedly hangs out, also for 20 bucks a month but with better machines.

Meanwhile, last Sunday, Henry and I played cricket with a bunch of Indians, some British and an Australian bloke. It was quite a bit of fun although we had to share the pitch with a group of Mongolian kids playing baseball. The few times that either of us managed a good hit, people from the other group would be trying to catch the ball. Man, catching those baseball balls with your bare hands hurts!
And tonight, finally, the first Hash ‘happened’. Much tamer than I ever experienced, it was a very hard run, running up one of the ridges in the National Park close to Ulaan Baatar. Only five of us ran, the rest of the group, some twenty people, walked a much shorter and easier route. I’ve been appointed RA, Religious Adviser, which basically means I can take the piss out of anyone. The group needs some shaking up.

Related:  Not the best start
This text is available under a cc-nc-a license.