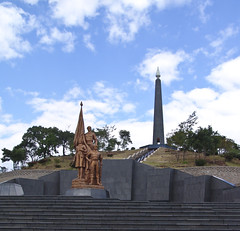 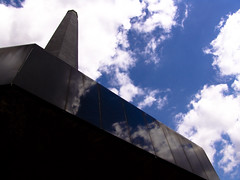 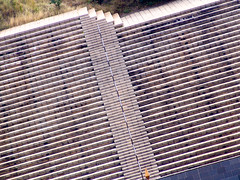 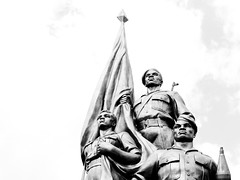 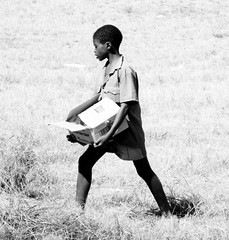 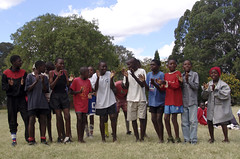 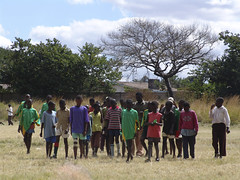 Ivor, my fellow Dutchie working at the SRC, helps with setting up the YES program, Youth Education through Sport. It's a bit of a mess (what isn't?) but this weekend saw the Harare-province's tournament, which has to come up with a team that will be sent to the regional (or was it national?) tournament, the Norway cup, where the team will be selected that will play soccer, representing Zimbabwe, in the international Norway cup in, you've guessed it, Norway. All players are under 16.
We arrived to a completely disorganized band of people. We were standing around, talking to some volunteers when a lady with a nice goatee walked up to us to show Ivor a kid with a cut on his head, as if to ask Ivor for money for treatment or a ride to the hospital. He made it clear we were not going to help and soon after, one of the vans left. With the kid and six of the volunteers, leaving about one of the volunteers on the grounds to oversee the soccer match.

Before heading back to town, we visited the not-so-impressive heroes acre where people like Mugabe's niece or others dying in car accidents get buried. We noticed four empty graves, undoubtedly waiting to filled up by that hero of heroes.

In the afternoon, we went down to The Phreckle et Phart (don't ask) to watch Dynamos vs. CAPS united, a soccer match. The 20 or so people hanging around in the bar seemed more dead than alive. However, as soon as the match started, everyone went nuts, dancing, gesturing wildly and taking their shirts off and on several times during the match.
CAPS won, two to one.

Related:  Great Zimbabwe
This text is available under a cc-nc-a license.