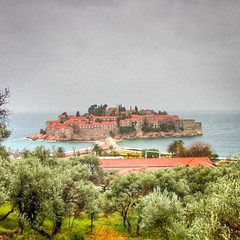 The piece de resistance on the Montenegrin coast is probably the little fishing village of St. Stevan. Similar to le Mont Saint Michel in France, the rock of a town is really a bunch of houses thrown on top of each other, connected to the main land through an artificial land bridge.
Where it differs from its counterpart in France is that, under Tito, the town was nationalized and converted into one big hotel. We tried to get in, but we're told the hotel will be closed until early April.

How do you nationalize a whole town anyway?

Related:  Bushehr
This text is available under a cc-nc-a license.