Close to Bagram air base 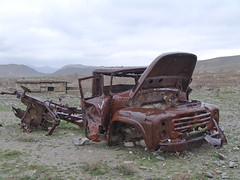 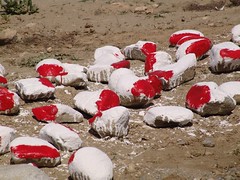 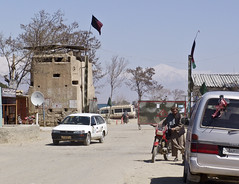 The entrance to Baghram air base
World » Afghanistan » Bagram » Main street, between the two kebab stores

The weekend's been tough, with three parties on Thursday and a going away party for Jesper on Saturday. Meanwhile, I still hadn't fully recovered from the rather active evenings of the week before. Then, we'd decided to visit the Salang pass, leaving at 8 in the morning and returning by 4 so that we would still be in time to start preparing the party at our place.
As it happened, Parvaiz only showed up at around 9 and by that time, Giovanni had left with the chowkidar to drop him off somewhere, supposedly taking only 10 minutes but staying away for close to an hour. We decided it made more sense to go to Salang some other time and now visit Bagram, the site of an ancient Graeco-Roman settlement and the current location of the main American airbase in this country.

With the weather wonderful and Parvaiz driving in such a way Schumacher would feel ashamed, we enjoyed the scenery, racing through the countryside. On several occasions, we drove past mine-clearing teams, slowly but surely trying to move the boundary outward from the road, marked in red and white painted stones.
Bagram itself wasn't very interesting. Nothing remains from the ancient settlement and it's nearly impossible to get close to the base, unless you're American AND introduced by one of the soldiers.

In the evening, time to say goodbye to Jesper. Although he's only leaving on Wednesday. He's been working hard to finalize a book and a CD ROM on what DACAAR's been doing over the last 21 years, but he's finding it a challenge to finish in time, staying in the office over the weekends and in the evenings, occasionally, till 10.
It wasn't all that bad a party, even though it was on Saturday, the next day being a working day. But I was so tired, I simply passed out on the couch at some point, I couldn't stay awake.

Related:  Reflections
This text is available under a cc-nc-a license.