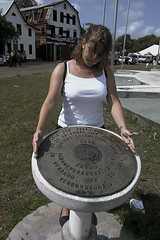 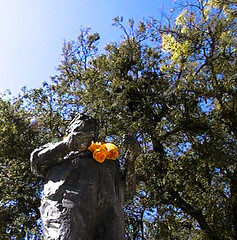 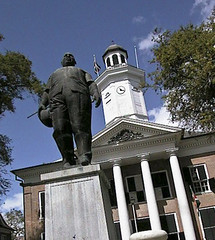 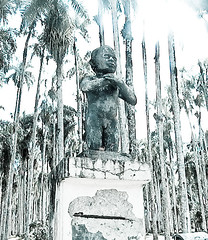 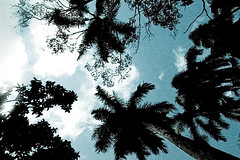 ‘Onafhankelijkheidsplein’ (independence square) used to be called ‘Oranjeplein’ (orange square) until independence, but that name soon fell in disuse after 1975. In a distant past, the grassy field was used as a practice area for the soldiers stationed in Fort Zeelandia but nowadays the field is mostly used for cultural events and, every Sunday, by men (they’re only men) fighting for the prize that comes with the title of best singing bird.
Often, you can see men walking around town with a small cage holding a singing bird. In the west, people take their dogs out for a walk. Here, they take their bird for a walk.
On the west side of the square, there’s a statue of the first Surinamese president of mixed descent, Johan Adolf Pengel. The same who gave his name to the airport at Zanderij. Directly behind the statue you can find the ministry of finance, which was originally planned to be city hall.
The ministry is a mixture of two building styles: colonial and old Dutch. The architect never envisioned a tower on top of the building but he was persuaded by the wife of the then governor who was convinced a city hall needed a tower, just like in her home town of Groningen.

Right next to the finance ministry, there’s the ministry of internal affairs. The house dates from the second half of the 18th century and its most notorious resident was Susanna Duplessis, wife to a slave owner. On a boat ride, she once silenced the baby of one of her slaves by holding it underwater for minutes on end because she couldn’t stand the crying and it’s mother couldn’t shut it up.â€¨Later, her husband fancied one of the young slave girls who, at the time, did their duties bare chested. Once, the girl wasn’t serving dinner as she usual would have done, but Susanna served it herself, astonishing her husband when he found out that what he was served were the severed breasts of the young slave girl.
At the southern end of the square, there’s the modernistic congress building. Commissioned by former president Wijdenbosch. It was supposed to be ready for some important foreign delegation coming over. The building was finished in a rush, resulting in leakage and cracked concrete almost immediately after finishing the building.
Between the southern and eastern side, a circle of flags are supposed to represent the countries that run an embassy in Suriname. Close to the flags, a monument remembering the Surinamese volunteers serving in the Dutch army during the second world war and a tree, planted in honor of the Hindustani immigrants can be found.

At the eastern side of the square the national assembly, the house of commons, overlooks the square. When we were standing in front of the building, Annerine, the girl whom we had gone to Cola Creek with (see later), bumped into us. She had set her sights on visiting the presidential palace, on the northern end of the square, but before we got even close to the entrance, we were stopped by a group of angry looking men with machine guns.
Some persistence resulted in us being directed to the presidential residence, to the side of the palace. After some asking around, we were giving an interview by phone with the relevant government employee, who told us that, in fact, it is possible to visit the palace, but only after requesting a visit in writing. Then, as soon as one or two months later, you could expect an invitation from the president himself.
In 1995, the then Dutch minister of foreign affairs assigned some 12 million euros for renovating the palace which was vacated by the Dutch in 1975 and hadn’t been occupied since. That is, the monkeys that had set up shop in the building were moved to the palm tree garden near the back of the palace.
Close to the president’s residence, Baba and Mai look out over the busy traffic route in front of them. The statues, an old Hindustani couple, symbolise immigration. Below the statues, a line of text reads ‘Where I fare well, that’s where my fatherland is’.