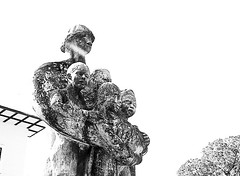 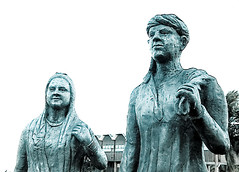 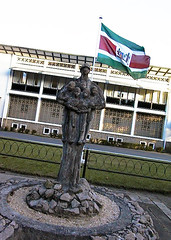 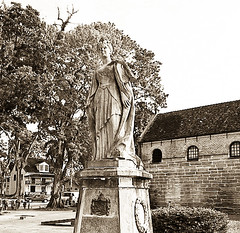 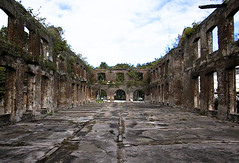 Paramaribo probably wouldn’t have existed if not for Fort Zeelandia. Originally built by the English, it was extended with five bastions by the Dutch in 1667. When in 1712 the French conquered some of the plantations downstream, it was decided to build a new defensive fortress closer to the sea. Fort Amsterdam took over as the main defense fortress in Suriname and Fort Zeelandia became more of a training ground for soldiers.

Between 1967 and 1982 the fortress served as the national museum but in 1982 the army of Bouterse took over the building as its headquarters. The infamous December killings happened at Fort Zeelandia.

Using some more of the Dutch government’s money, in 1995 the fortress was revamped and reverted to its original style and now more than ever breaths a 17th century Dutch atmosphere.

Close to the fort you can find the Nola Hatterman institute, and a statue of a former queen of the Netherlands, Wilhelmina, which stood on the Onafhankelijkheidsplein until 1975.

Related:  Peperpot
This text is available under a cc-nc-a license.